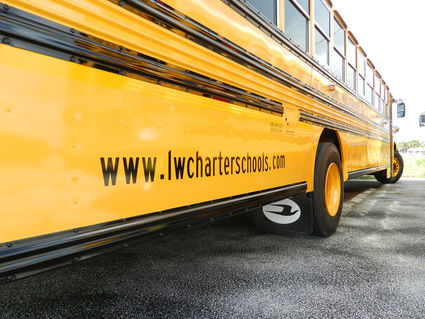 The start of any new year brings changes – large and small – not only in the schools and classrooms, but to every aspect of the operation of a charter system, including the transportation department.

Some of the smaller changes are already in place, like retooled bus stop schedules. New this year is the concept of "pocket stops", combing what used to previously be multiple stops into one central location.

Becoming more efficient with its all routes serving – making sure thousands of students got to each of seven schools safely and on time – was a major goal this summer in light of the doubling of enrollment of Bok Academy South.

The idea of pocket stops was mostly employed in pick up areas outside of Lake Wales, but some traditional stops nearer to a particular school also were combined. In addition, some stops within a two-mile radius of a school were also eliminated per state education law.

Those decisions, according Dr. Julio Acevedo, Director of Human Resources and Transportation, were made on a case by case basis using many criteria that centered on student safety. He also noted that transportation office personnel spent weeks before school opening contacting as many parents as possible about the changes.

The transportation department operates on on annual budget of over $2.2 million, with a fleet of almost 30 buses that are all new within the last two years.

A bigger change will be coming later this semester, when the charter system will debut a new computer system that will require students to swipe their ID card every time they get on the bus.

This will allow drivers, school administrators and parents to know where students are at any time, and ensure that only those students assigned to a particular bus are on board. Officials said it will be particularly helpful as a tool for younger students who might not always know their stop location or home address.

The system is also GPS equipped, allowing officials to know a vehicle's exact location in case of an emergency.

Drivers underwent two-days of in service training last week to prepare for the 2019-20 school year, and for the second year will get certified first-aid and CPR training.

For questions regarding transportation issues, parents can contact the central office at 679-6560.