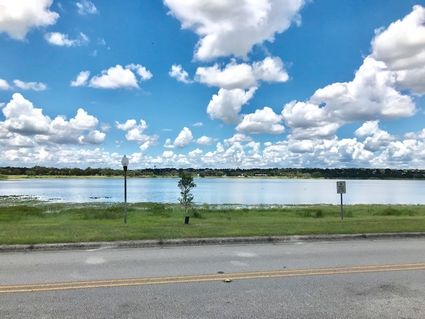 Club member Dick Howell on Aug. 21 updated the city commission about the project, noting the 50 trees planted in the spring of 2018 on the north side of the lake were "thriving nicely." After the second 50 trees were planted in May of 2019 along the south side of the lake, city officials and some Rotary members started hearing rumblings from residents unhappy with the tree placement.

Lakeshore Boulevard homeowner Jonathon Johnson represented about 15 of his neighbors in objecting to the tree project, which was given the go-ahead by city officials in 2018. Johnson met with representatives of the Breakfast Rotary Club and the city and encouraged others to call the city if they objected to the placement of trees across Lakeshore Boulevard in front of their property.

The live oaks planted were 5-6 feet tall, but experts say they grow about two feet a year and eventually could be 50 feet tall with 100-foot canopies. Johnson said the original Olmsted Brothers' plans for the lake included magnolias and palm trees on the south side of the lake, not just live oaks.

"I'm 34 years old and I'm going to live there and look at that lake from now until forever," Johnson said, noting that homes on Lakeshore Boulevard South generally were at a higher elevation so the expanding tree canopy ultimately would block their lake view, potentially reducing their property values. "We called and complained. The city marked the trees and the trees were removed."

Johnson said he would like the Rotary clubs to consider planting fewer live oaks and possibly some other types of trees, but after his meeting Aug. 26 with City Manager Ken Fields he was not going to pursue the matter further.

City officials said they did not demand the removal of any trees, but shared concerns with Rotarians and suggested they not plant the trees directly in front of homes. Howell said to placate the homeowners the club pulled up 20 of the 50 trees planted on the south side of the lake. Those trees will be replanted, along with the next 50, in the spring of 2020, Howell said.

Speaking to the city commission, Howell said: "At the time our Rotary group was not looking forward to removing any of the trees we had just bought and planted. After all, in good faith we had just completed the 2nd phase of our beautification project to enhance the path for all the citizens of the greater Lake Wales area and were get positive feedback from everyone except those disappointed residents."

The tree planting project was spearheaded by Lake Wales Breakfast Rotary Club member Preston Troutman after the Rotary International president in 2017 challenged clubs to plant trees to enhance their local environment. Troutman, who lives on Lakeshore Boulevard, enlisted support from two other local clubs, the Rotary Club of Lake Wales and Rotary on the Ridge, both of which donated funds for purchase of trees, which cost $50 each. Howell reminded commissioners that "the trees were all paid for by donations and sweat of the members of the Lake Wales Rotary clubs."

City Manager Ken Fields thanked Troutman in a July 1 letter, but asked for a few concessions to avoid affecting the "visual environment" of area homeowners: "Thank you to the Lake Wales Breakfast Rotary for your project to plant Live Oak trees surrounding Lake Wales to enhance the tree canopy cover for the City and to replace the trees lost during the hurricanes that have occurred over the past fifteen years. Increasing the tree canopy cover of the City improves the natural environment, contributes to the reduction in atmospheric carbon dioxide, and finally has been proven to improve a city's tax base by enhancing property values."

City Attorney Chuck Galloway issued an opinion that the property around the lake belonged to the city and homeowners had no legal rights to an unobstructed view. Fields told Troutman trees could be planted between properties at any elevation, "even if the peripheral view from a property may be partially blocked." 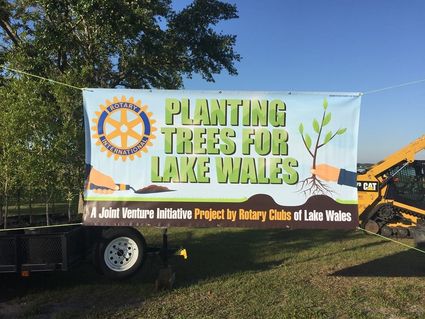 Howell expressed concerns about potential news coverage of the tree issue, saying he would prefer the focus be on the extensive community and international service his club has performed over the last 37 years. In addition to the tree planting project, the Lake Wales Breakfast Rotary Club holds two weekend camps for area elementary age boys and girls who might not otherwise have such an experience. The club also awards scholarships to local high school seniors and supports leadership training for rising seniors and has been involved in over 40 service projects in Honduras, including cataract surgeries, clean water initiatives and sponsorship of a Christian ministry that houses, feeds, protects, educates and mentors abandoned and mistreated girls.

EDITOR'S NOTE: This writer is a former member of the Lake Wales Breakfast Rotary Club and through Rotary on the Ridge has supported the tree planting initiative.