The early settlers of what is now Lake Wales were hearty, adventuresome people, real Pioneers, descendants of their ancestors who traveled via oxen-driven covered wagons and were true to their code of "Ten Tandra Via Est" meaning "The way remains to be tried".

Such people included Nellie and her husband, Nile E. Stewart. In October 1912, after a long and difficult, sometimes dangerous trip through swamp, overcoming their fears of possible snakes and alligators, they travelled through Winter Haven, then Haines City, finally catching the 3-car cattle train to Lake Wales. They came from a city of 40,000 people to a land company hotel completely under construction and inhabited by only a handful of people and workers. The Stewarts were some of the first Northerners to register in what was to become the Hotel Wales.

As a true "Pioneer Woman", Nellie Stewart and her husband stayed in the hotel one week and then moved into a bungalow which had been used to house workers until their houses were built. There was no water, gas, or lights and they braved the incessant ants and fleas with perseverance. Drinking water was brought from the hotel, but most of their water came from the Lake. They weathered hardships we could never imagine.

Through the following years, Nellie Stewart showed herself to be a kind, generous, community-minded woman. It is noted in the written histories of early Lake Wales that she often fed the black workers when the surveyors came to town. She was also a bit of an early conservationist as is evidenced by her timely protests when a force of workers began cutting down Pine and Oak trees in the newly created Crystal Park, saying that the Northern guests for the hotel would "think them beautiful". She persuaded them and the trees stayed as they are today.

Nellie was instrumental in organizing social events to make the trying pioneer life a bit easier. She was known to give a good party, and her events were amusing and creative, many of them taking place in the hotel. One hundred and five years ago, on May 25, 1914, Nellie invited a group of her friends to join her at the Hotel Wales for a "Thimble Party". This started the storybook tale of the Woman's Club. Seventeen ladies were present. While sitting around chatting and sewing, they decided that they should form a club and meet every two weeks at a different lady's home every time, naming it "The Merry Go Round Club". They established dues - $1 a person – and sent a portion of the money to the Orphan's Home in Jacksonville. The Club went through different names over the next six years, finally becoming the "The Lake Wales Woman's Club" and becoming Federated.

The GFWC Woman's Club of Lake Wales has followed the "pioneer spirit" of Nellie Stewart since that time. In 1920, the Club established the first Public Library through donations of books from the community. Between 1921 and 1926, The Club was solely responsible for maintaining area parks with a number of well-attended social events being held to support the effort. The Club provided ongoing support to the High School for their orchestra and "Emergency" fundraising was undertaken to provide 200 school library books so the school could retain its state accreditation. in 1922, on what was then Depot Park, the Woman's Club set up a large Community Live Cedar Christmas Tree outside and decorated it with colored ELECTRIC lights, Christmas stockings, and glittering ornaments.

In the 1940s, the Club supported the war effort through their "Bundles for Britain" sewing and knitting program. Classes were held and items made and donated to the Red Cross War Relief, U.S.O., and the Salvation Drive. On January 2, 1940, the Club founded the Lake Wales Little Theater, a community project that is still in operation today. In 1943 the Club sold $4,476.25 in war bonds to support the "Buy-A-Bomber" Campaign. Dinners and dances were held at the Club House for service men. In March 1947, the first Fashion Show was held at the Club House.

In the 1950s, numerous successful fundraising events were held with large community attendance and support. On May 11, 1953, the Evangelical Lutheran Church had their first service at the Woman's Club House and continued to rent the Club house for their services until they moved to their own church in 1957.

In the 1970s, the Club concentrated on extensive funding and support to school, health and community needs programs. Breast Cancer Awareness and the Hacienda Girls Ranch were taken on as a focus for the Club and the High School Scholarship Program was initiated. In 1976, Pennies for People collected pennies for parks and for trout pond, which was a Recreation Area for handicapped children.

In the1980s, the Club had new focuses. They took on the responsibility of improving and maintaining the grounds at Spook Hill as well as co-sponsoring a conservation awareness competition and awareness program for 6th graders. The Club provided funding to help publish the local history book called "The Crown Jewel of the Highlands" by Janyce Ahl. The Club also supported other health-related programs such as eye screening for preschoolers, a CPR machine for the Lake Wales Hospital ambulance, and cancer awareness. In 1982, the Club began contributing to the Hoby (Hugh O'Brien Youth Foundation Leadership) Foundation.

In the 1990s, the Club established the "Read Aloud" program at the Library during the summer for children ages 4 to 7 and members of the Club joined the newly formed Literacy Council. A "Let's Live Forever" Endowment Fund was established by the Club to provide an opportunity for families of deceased club members to memorialize their women in the Club and to the community through contributions to the Fund in their name. 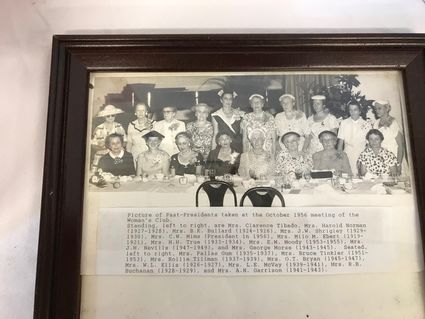 Woman's Club past presidents at 1956 meeting

From 2000 to present, the Club has continued as a driving force in maintaining and improving the quality of life for the City of Lake Wales and its citizens. In 2018-2019 alone the Club contributed to the President's Project Operations Smile and provided five smiles through member donations and a Spaghetti Dinner Fund Raiser. A Community Café "Dining With Dignity" was held and we provided school supplies, sanitary supplies, and clothes to Spook Hill Elementary. The Club participated in Pioneer Days and Make It Magical and also collected Christmas presents for the Care Center as well as wrapped presents for the Care Center. A Fashion Show was held in January to support various projects and the Club supports the upkeep of our Historic Building. Over the past 100 years, over 4,000 people and groups have benefited from the dedication and generosity of the area women who joined together to serve their community as the GFWC Woman's Club of Lake Wales.