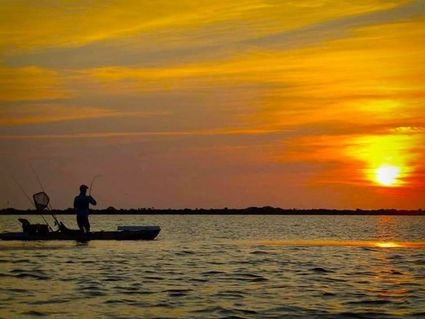 Kayak fishing is a growing sport and it's easy to see why. Kayaks are nimble, less expensive than most motorized boats and provide access to places even the best casts from land just can't reach.

The Recreational Boating & fishing Foundation confirms that kayaks are the most popular type of boat for Americans to own and that the number of people participating in kayak fishing has gone up in the past six years.

But those who love the sport say kayak fishing is more than just a quick and less expensive way to get on the water.

"You are more in tune with what is going on," said avid kayak angler Tony Hart, who runs YakOutlaws.com, a website dedicated to all things kayak fishing and stand up paddleboard angling. "The slower approach gives you an opportunity to take in more. It's almost as though you become a part of what's around you."

"Because you are so low in the water, there is this sense of vulnerability when you start fishing, but you also have this feeling of freedom and accomplishment, blood, sweat and tears," said Justin Ritchey, who has been kayak fishing for 10-plus years and has competed across Florida and internationally, taking fourth place in the 2014 Hobie fishing World Championship in Amsterdam. "I'm very passionate about it, it's a huge part of my life."

Interested in kayak fishing? Read on to learn more about why this sport is booming and how you can get in on the action.

Like many kayak anglers, Hart and Ritchey got into kayak fishing for similar reasons: they loved fishing and didn't have access to a boat.

Ritchey, a fishing manufacturer representative from Orlando, got his start in college renting a two-person kayak for the weekend and asking random classmates to foot the rental fee for time on the water. Ritchey would provide the car, fishing gear and knowledge.

Hart was fishing from a dock in Jacksonville when he noticed fish off a point too far for him to reach casting. "That's when two young guys paddled by and I thought, that's the smartest thing in world," said Hart. "The next weekend I got two kayaks."

What often gets people into kayak fishing is the ability to access places they just can't reach from shore.

"You can go anywhere you want with no stress of a motor breaking down or electronic failure," Ritchey said. "And because you are quiet, you can often get closer than boat anglers can get." You also can often get in shallower waters than many motorized boats. 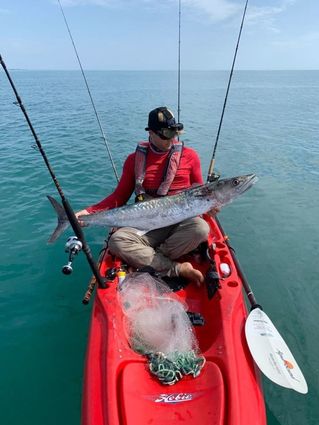 Some might be thinking, kayaks are great for seatrout and redfish, but what if I want to catch a monster tarpon or a sailfish?

While what you catch within paddling distance will vary according to where in Florida you are fishing, if you can catch it, your kayak can take it.

"Being able to catch every species from a kayak is personal goal of mine," said Ritchey, who has personally caught sailfish, blackfin tuna, mutton snapper, kingfish and tarpon from his kayak. "In a boat, when a fish takes a lot of line, you have less control. In a kayak, you might be getting towed, but you are never too far away from the fish, which allows you to get the fish in much faster."

Ready to Get Your Line Wet - Expert Tips

• Don’t be afraid to spend more for quality, safety and access. Ritchey says most kayaks will hold their value, so if you decide kayak fishing is not for you, you should at least be able to get some of your money back.

• Safety is key. Invest in a personal floatation device you will actually wear, carry a whistle or other sound-making device, and establish a float plan or let someone know where you are going and when you will be back. “Buy a life jacket that fits and is comfortable,” said Hart. “To me that is the biggest thing. Spend the money. Get a PFD that’s going to take care of you.” Inflatable lifejackets are very comfortable and are gaining popularity as well.

• Try one out. “A lot of outfitters offer demo days,” said Hart, who suggests getting a feel for different types of kayaks before making a purchase.

• With any luck, your paddling hands will be busy reeling in a big one, so look for a kayak with foot propulsion pedals.

• Start with a sit-on-top, which is easier for ocean going trips (and dealing with Florida’s hot summers).

• Accessorize: kayak fishing may have started with nothing more than a pole and boat, but these days anglers can customize for whatever preference or need they have, and we are not just talking cup holders. One of Ritchey’s three kayaks has a livewell, depth finder and a downrigger. Consider having more than one kayak for different types of fishing.

• Learn from others. Attend seminars about kayak fishing, find others who kayak fish and ask lots of questions.

• Get started in saltwater by sight-fishing in shallower water, two feet or less, or try bass fishing at a local pond or lake. The key is to look for places without a ton of current to contend with until you get used to the feel.

• Concerned about tipping? Try to keep the fish off the front of your kayak, which is the best and most comfortable way to fight a fish.

Make it a lifetime sport

• Have kayak, will travel. Florida is bountiful when it comes to different fishing experiences. Strap that kayak securely to the roof of your vehicle and take it with you. You never know what you might catch next.

• Bring the family. Kayaks come in all kinds of sizes and make for a great family outing. Take out those kayaks and build fishing memories that will last a lifetime. “My fondest memories are when my wife, kids and I all go out together,” Hart said, referring to his two young sons.