Speaking Up Can Save Lives 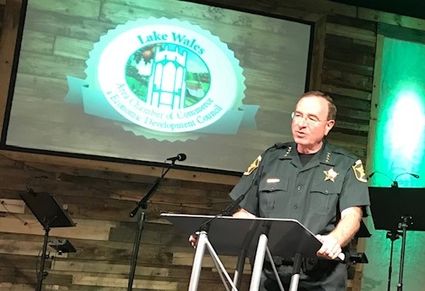 "See something or hear something, say something." That's the advice Polk Sheriff Grady Judd gave Lake Wales Chamber of Commerce members at a breakfast Thursday, Sept. 12 as the most effective way to avoid an active shooter situation.

Judd said prevention is key because a "nut" with a gun can do tremendous damage within the first two to five minutes, before most law officers can even arrive on scene at a crisis situation.

"It's the absolute truth when a madman comes in with a gun, the only thing that stops a bad guy with a gun is a good guy with a gun," Judd said. "It's better to have a gun in your hand than a cop on the phone."

Judd said many people fear an active shooter situation even though people are 450 times more likely to be killed in a car crash than by someone coming into a church, school or place of business and shooting people, "But statistics don't mean anything when people are running into the schools and shooting our children."

Judd offered the good news that the crime rate for Polk County served by the sheriff's department is at a 47-year low and people are 40 percent less likely to be a crime victim than in other parts of the state. His department has proactive and crime analysis programs that help, but they still need the support of citizens to be "eyes and ears" and report suspicious activity. He encouraged attendees at the "Biscuits and Grady" breakfast to engage with the sheriff's office on social media, helping solve crimes they hear about on Facebook or Twitter.

Judd says he is a "huge second amendment fan. I don't believe you can own too many guns or too many knives," but he is against open carry laws, allowing weapons to be visibly worn: "I fought against the open carry. At the same time I truly believe you ought to carry if you're not a felon or have mental health issues because you can't have enough good guys with guns when a bad guy shows up."

Judd says seeing a weapon doesn't deter a bad guy, who instead will shoot the person with a firearm first.

"I want it concealed and hidden," Judd said. "If gun is showing, it takes away the tactical advantage – pointing a firearm at a real criminal does not intimidate him.

Judd said his SWAT officers act as trainers and will work with area businesses to provide active shooter training and to help design safety plans, including placement of workers with guns to keep an eye on entrances while avoiding the potential for people getting caught in a cross fire.

Judd praised officials from the Polk County School District and Lake Wales Charter Schools for quickly implementing programs to have armed, train guardians on every campus. He related his experience serving on a state commission looking into the 2018 Parkland high school shooting in Broward County where a former student with an automatic rifle left 14 students and three staff members dead and 14 others wounded. He said the school system and law enforcement failed as there were warning signs that 19-year-old Nikolas Cruz posed a danger. A review showed the on-campus sheriff's deputy arrived on the scene within one minute and 39 seconds but didn't enter the building; by that time Cruz already had shot 23 people, Judd said.

"In the vast majority of these shootings, almost without exception, there were signs in advance that were ignored," Judd said, reinforcing that people need to speak up if they hear or see anything so "We can make it safer."

Judd acknowledged that not enough mental health services are available so law officers need friends, family and co-workers to help identify potentially dangerous people, many who don't think they have a problem or resist help. "I'll give you the scientific name for a person who shoots, in Polk County vernacular, they're just a nut."

Judd did offer some advice if people find themselves somewhere with an active shooter: "First thing you do is look for the red exit signs. If you're there and you hear this pop, pop, pop it ain't the 4th of July. Somebody didn't drop the canned goods someplace else. Run for the nearest exit and get the heck out of the way. The best defense is distance between you and the gun."