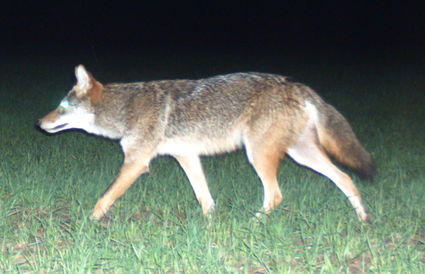 File photo of coyote in Florida.

Wilena and Courtney Vreeland of the 400 block of East Johnson Avenue knew something was amiss when their cherished pet, "Tyger" didn't show up his morning feeding.

Having just started the search for their missing feline, a neighbor related having heard a loud disturbance in the early morning hours which only added to their apprehension.

"We knew something was terribly wrong," said "Willie" Vreeland. "He's always there like clockwork waiting at the back step for his breakfast."

With no Tyger to be found, the couple decided to resume the search at their DVR hoping one of eight surveillance cameras would be able to shed some light on the previous night's events.

Subsequent video replay not only fingered the culprit, a large wild coyote, but also their cat's elusive escape that involved leaping on the top of a car, jumping onto a fence and from there ultimately hiding in a tree.

"We could see Tyger's eyes" just high enough off the ground to avoid the coyote's attempts to make him a meal, an elated Willie described recapping the happy, although life-altering, ending to the mystery.

"As soon as we couldn't find him we went to the video and that's when we saw the coyote." The same day, "about eight hours later we saw him sitting across the street," Willie went on. "He looked like something out of the Stephen King movie Pet Sematary, his fur was matted and he wouldn't even come into our yard."

Willie has noticed that Tyger, a large Norwegian Forest cat typically unaffected by frequent run-ins with noctural creatures, was traumatized by the coyote encounter. "It has been a particularly bad day for him," related Willie. "Now he won't go outside. He's scared half to death. If you don't walk around with him he's not going back outside.

"I asked the Police Department if Lake Wales will let me shoot it if it came back on my property." said Willie. "The Lake Wales Police say, 'No, you can't discharge a firearm.'"

But there's help available not only for anyone else experiencing the same or a similar problem with wild animals, but also by providing advice and instructions on how to avoid these frightening and potentially dangerous encounters with wildlife.

"In general, across the state, people are surprised to learn that coyotes have been documented in all 67 Florida counties," explains Kilborn.

Willie Vreeland asked what she could do to protect both her neighbors and their pets, and an FWC official sent her the information she needed to compile a one-page "do's and don't's" flyer that she copied and distributed to nearly 50 local residents in her immediate neighborhood.

"She was so nice and she said to 'Make sure to go to all of the neighbors and get this packet to them,'" related Vreeland alluding to her local FWC contact who was the one beacon of hope when no other agency could provide the aid Willie and Courtney so desperately needed, at least at that critical juncture.

In the meantime SW Region FWC Director Kilborn describes what area residents can do to educate themselves and others, which include the fast action and selfless contribution exemplified by concerned citizens like the Vreelands as purveyed in their door-to-door coyote preparedness handout.

Coyotes can be found throughout Florida and have been documented in all 67 Florida counties. They can be found in several habitat types and are common in rural, suburban and even urban landscapes. Coyotes came to Florida as part of a natural range expansion from western states. They can also be found in every state except Hawaii.

Coyotes naturally prey on smaller animals, so they can and do prey on small cats and dogs. To prevent interactions with pets:

• Pets should not roam freely. Cats should be kept indoors and small dogs should be walked on a short leash.

• People should use caution when walking pets in wooded areas or near heavy foliage, as these are areas where coyotes could den or nest.

Coyotes can be attracted to any easily available food sources. If coyotes associate places where people live and work as an easy place to find food, they will become accustomed to people and gradually lose their natural fear of humans. People can significantly reduce or avoid potential problems with coyotes and other wildlife by removing attractants from around homes and neighborhoods.

• Cat, dog and livestock food should not be left where it can be accessed by coyotes.

• Fallen fruits and seed around bird and wildlife feeders should be cleaned up, as these will all attract coyotes.

• Garbage also attracts coyotes, so it is important for residents to secure trash and compost in animal-proof containers.

Coyote caught on video near Johnson Avenue in Lake Wales

Not wanting them shot, FWC Director Kilborn takes a more conservative approach and admits coyotes are here to stay although habitat encroachment, improper pet care and safety precautions, and the introduction of coyote attractions all contribute to an increasing likelihood of the type of encounter the Vreelands experienced first-hand and captured on video, thanks to enhanced security measures.