Cain Growing Sea Scout Program in Lake Wales and Beyond

Most people know about the Boy Scouts, but its water-related affiliate, the Sea Scouts, is far less known. But 20-year-old Ron Cain from Lake Wales is working to change that.

"We're the premier aquatic program in the country," said Cain, who is serving as Southern Region Boatswain, an ambassador and national board member for the co-ed program that serves young people ages 14-21. "They always say it's like the best kept secret in scouting."

Cain joined Sea Scouts at age 16, curious after seeing scouts in navy blue uniforms instead of the traditional Boy Scout tan. Since then he has helped charter five new chapters, called ships, including one sponsored by the Guy Harvey Camp Mack Resort in Lake Wales. Ship 955 at Camp Mack was started with six members and Cain hopes to grow it to at least 30 scouts: "The more kids the better." The ship meets twice a month and plans its own activities, which recently included a water cleanup by canoe around Camp Mack.

"Basically we're groundbreaking. We're the first Sea Scout ship to be focused on airboating and fishing," said Cain. "The national president of Boy Scouts says we're the future of Sea Scouts. He hadn't heard of Lake Wales but now says 'you guys are doing something cool down there.'"

The Sea Scout program was started in 1912, two years after the Boy Scouts of America. Cain said Sea Scouts saw their heyday in the 1940s and now have about 5,000 members in the U.S., compared to about 1 million Boy Scouts.

"We do anything water-related – scuba, kayaking, sailing, motorboating, fishing, marine biology, marine architecture and marine engineering," Cain said. "Instead of going on a camping trip, we're going kayaking. Really, we just want to have fun."

Sea Scout programs don't need to be near the coast, just somewhere they can enjoy water activities. Cain said sailing programs still are popular, but inland areas now are more likely to offer kayaking, canoeing and paddle boarding. Cain said Sea Scouts have flown to Portugal and sailed back to the U.S. and his group is planning a scuba diving and water sports trip to the Cayman Islands, headquarters of Guy Harvey resorts.

"Guy Harvey is really behind us," Cain said. "He used to be a Sea Scout in the Bahamas where he got into art and marine art."

As Southern Region Boatswain Cain supports programs in 13 states. He is the first national officer from Florida and likes telling people about Lake Wales, "I'm just repping the city as much as I can."

Cain is accustomed to success. He earned all 137 merit badges offered by the Boy Scouts and became an Eagle Scout after completing a project in Maryland where he restored a military encampment on the Maryland museum property dedicated to the story of Dr. Samuel Mudd, the physician who was jailed after treating the broken leg of John Wilkes Booth, the assassin of President Abraham Lincoln. He also has completed Sea Scout leadership training, earned a state leadership award and served as a lodge chief. Cain also succeeded in fighting off cancer at age 18, perhaps his greatest triumph to date.

Home schooled and living on the Flaming Arrow Boy Scout Reservation, where his father David serves as camp ranger, Cain recognized the need for more fun activities for teens and young adults.

"There's not much to do in Lake Wales for young adults. Sea Scouts is like a social club for the kids to learn stuff and just have fun," Cain said. "We're really passionate about the program." 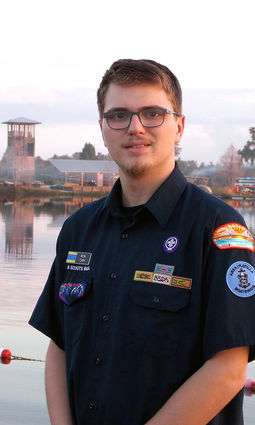 Cain said adults also can be involved in Sea Scouts, and the group can always use additional sponsors and support. He is planning to visit local middle schools and high schools to recruit new scouts and is available to speak to community groups. He recently presented a program about Sea Scouts to the Rotary on the Ridge service club. For more information, email Cain at [email protected] or call him at 301-346-6622.