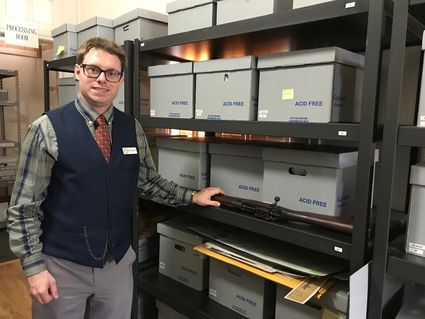 Lake Wales History Museum Curator Bartholomew Delcamp worked tirelessly for the last three-plus years cataloguing nearly 20,000 items, organizing collections, creating new exhibits and assisting in educational programs and tours. His hard work and dedication to the history of Lake Wales were recognized Sept. 17 when he was named 2019 Outstanding New Professional by the Florida Association of Museums.

Delcamp started as an intern, then served as a part-time museum assistant before being promoted to full-time curator in October 2017. The 29-year-old who grew up mostly in Winter Haven said he has always been a history buff, often dragging his family to museums for field trips during his childhood.

"I'm really grateful and really happy to win this award," said Delcamp. "There's some really good history here and there are so many opportunities. This Museum's great. Mimi (Hardman) did such good groundwork on everything, we can really elevate it and do so many different things I think can really benefit the museum, and also the community and the town as a whole."

Delcamp was especially proud of a special museum exhibit he created last year called "Building a Legacy: Mountain Lake." It was a true labor of love due to his close connection to the Mountain Lake community, where his father, John, worked for 22 years.

"That was my baby. It was really personal to me and I was really happy with how it turned out," Delcamp said. "Mountain Lake is older than the official record of Lake Wales becoming its own town and they've been linked side-by-side this whole time. But so many people drive right past the gate at Mountain Lake and don't realize what's back there or the impact it's had on this town."

Another personal project for Delcamp is his Cabinet of Curiosities at the Lake Wales Public Library. Delcamp changes out the items every couple of months, showcasing unusual finds that don't exactly fit into a traditional exhibits. The concept grew from Delcamp's interest in the origins of museums, which date back to the 17th century.

"Aristocrats would just travel the world and collect random things they found interesting. Usually it was related to natural science, taxidermy or weapons, and then they would show them off to their friends in what they called a wonder room," Delcamp said. "Eventually these collections grew so large that they donated them to public spaces and they became the first museums."

Delcamp presented his project at the recent state conference, calling it "Bling on a Budget." Some of his favorite found curiosities include a moonshine jug, piece of the Berlin Wall, a letter from former U.S. President Gerald Ford to the City of Lake Wales, an 1870s pepper box pistol and Chinese currency dating back to the 1920s. Playing off the old telephone prank, he also displays a can of Prince Edward tobacco, and for Halloween he likes to bring out an antique wicker coffin.

"We have so many artifacts that people don't really get to see," said Delcamp, who enjoys researching an item's purpose and history. "So I thought I'd go back to the origins of museums and create a cabinet of curiosity. I can just put out any random artifact I find interesting, and it's been real popular."

Delcamp said he is looking forward to the opening of Mimi Hardman Collections and Research Center in the old 1916 Seaboard Airline Freight Depot, a block north of the Lake Wales History Museum. A new Friends of the Museum group will be raising $37,500 to match city funds to restore the building, which will house many artifacts currently being stored in several locations.

Delcamp was nominated for the state award by his supervisor, Museum Director Jennifer D'hollander and her supervisor, Library Director Tina Peak, both of whom wrote glowing letters of recommendation, praising his hard work, dedication to local history and positive attitude.

"Bart is a dedicated and passionate museum professional. He has demonstrated on countless occasions his commitment to the field and the Lake Wales museum specifically," D'hollander wrote. "Bart has been an integral part of the massive reorganization of the museum collections, including a complete inventory and new storage of 20,000 items, which is an ongoing endeavor."

She pointed out that Delcamp has assembled history kits for teachers to take into the classroom and even brought in his personal collection of Lego displays, allowing museum visitors to play with them during one of the Museum's Summer Fun Days.

"Bart continues to demonstrate a passion and enthusiasm for his work at the museum and the field in general," D'Hollander wrote. "Bart has demonstrated responsibility, integrity, honesty and authenticity."

Peak pointed out Delcamp's commitment to expanding his professional knowledge and networking, calling him "a motivated and committed young leader" with a strong work ethic. Not only is he involved with the Florida Association of Museums, but he is an active member of the Society of Florida Archivists. Next summer Delcamp will spend 18 days working with museum professionals at historic sites such as the City of Bath, Stonehenge, Kensington Palace and the Tower of London. 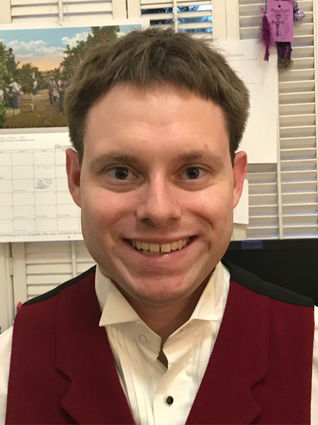 D'hollander was happy to sing Delcamp's praises and thrilled that he won the state award: "He has exceeded professional expectations, shown authentic leadership and a creative spirit, demonstrated warmth and care for visitors and volunteers, and shows an unending passion for museums."

The Lake Wales Museum is located at 325 S. Scenic Highway and is open from 9 a.m. to 5 p.m. Tuesday through Saturday.

Delcamp will bring some of his curiosities and talk about the museum at the Oct. 7 gathering of Rotary on the Ridge, a regional after-hours service club which meets from 5-6 p.m. in the community room at the Ouellette Law Firm, 151 E. Central Ave. in downtown Lake Wales. Visitors are welcome, and more information is available by emailing [email protected]