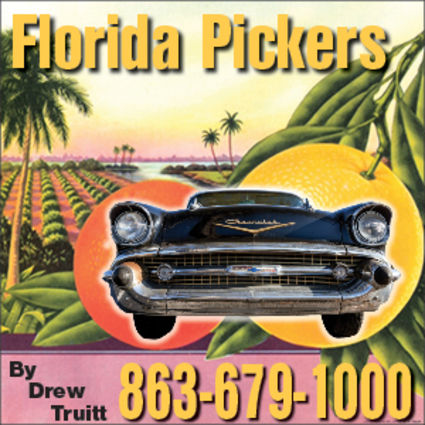 On a recent trip to Sebring I already knew that the city that hosts the world famous "Twelve Hours of Sebring" races each Spring would be the perfect hunting ground for classic and exotic cars. What brought me to Highlands County was a 1938 Chevrolet Master Deluxe belonging to Nestor Peralta, who had decided to part with his longtime ride that in the good times tooled around New York state with his father at the helm and family in tow.

The coupe had been in a fire and Nestor's father and uncle purchased it from a salvage yard in the early 70s right around the time Nestor was born.

When Nestor moved to Florida in the 80s the old Master Deluxe went with him, and has sat in his shop, Economy Auto Repair and Air Conditioning, 330 U.S. 27 N., for years.

I run into these situations all the time and it never ceases to amaze me: Vehicles taking up valuable space in shops and garages that could be much better put to use.

So what is it that makes men (and women, too) act totally out of character when it comes to cars?

Those unexplainable circumstances are what Florida Pickers (FP) is about, and a crucial part of the column because there's always a story lurking in the background.

I can understand Nestor's attachment. I have always thought that, like people's names, the cars or trucks they drove were a part of their identity, of who they are. We didn't need to see a face. Just the car and color were enough to say, "There goes so and so."

That is, until cars all started to look alike.

Today's vehicles have become homogenized. You don't have to adjust the carburetors to get the motor running right. In fact, you do need a high-priced computer to diagnose what's wrong when there is a problem. The days of working on your own car are gone unless you own a classic. By the mid 90s all cars came with those pesky devices that were a boon to auto dealerships service departments.

FP is about bringing back those pre-80s vehicles that are sitting, waiting for a new lover/owner to come along and put them back on the road. Sadly, many are too far gone to do anything with cost effectively, but others like the 1975 Ford Pinto I ran into in Sebring with 78,000 original miles on the ticker will likely find a new home.

My process is simple: Locate a classic or unusual car; post it and then wait for contacts.

Then the fun begins. Negotiation, give and take, deal or no deal are all parts of FP's involvement that provide those anxious moments that make it sweeter when a handshake ensues. Down deep I know that I am making history happen in front of our eyes, and it is thrilling when the check is cashed, the tow truck arrives, the formerly dormant auto is pulled onto a flat bed or loaded on a trailer.

While I write this I am diverted with fielding messages from several new prospects for a $15,000 1971 Ford Bronco that is one of those borderline, "is it worth restoring?" questions that make this business fun and worthy of writing about. Half the stuff you can't make up.

Pricing is subjective. What someone will pay for something is the determining factor in valuation. And what someone has "into" a vehicle in terms of repairs and restoration is not often recouped and therefore, not a factor.

Sebring didn't disappoint. I stopped at mechanic shops, dealerships, and private homes thanks to leads from new acquaintances which is another advantage of actually visiting a community in person rather than searching "for sale" vehicles online.

I left town with several cars to post for sale including the '38 Chevy, '71 Bronco and '75 Pinto.

In addition, I created an opportunity to cover Sebring International Raceway in a future column on racing, and took a great photo of a NP01 sprint-style racecar at Sick Sideways, 7820 Tractor Rd., and another FP visual of a 1952 Rolls-Royce Princess at Campbell's Collision Center, 1495 US-27 N. who were both kind enough to allow me to include them in this Sebring report.

I often have to take the back roads and talk to locals to find out where cool stuff is, and other times it's to act on a feeling that something is there, hiding, just waiting to be discovered. There is life in inanimate objects especially when it comes to cars. You just have to listen real hard for voices relating the stories that must be told before they go silent.

Last week in my inaugural Florida Pickers column I featured a 1966 Impala SS that was for sale for $1,200 in Auburndale at Raw Auto Parts, 805 Old Winter Haven Rd.

There was a 5 p.m. Friday deadline to sell it, and promptly, at closing time, a deal was sealed. It didn't sell to one of my people, but I feel that I had a direct hand in finding the buyer.

However, the 1973 Super Beetle in Lake Placid did sell to one of my prospects so I was one for two. Batting .500 is good enough for me.

My mission is to have 100 vehicles actively posted by the end of the year so any referrals you can send my way are greatly appreciated. Some of my best transactions resulted from a hot lead.