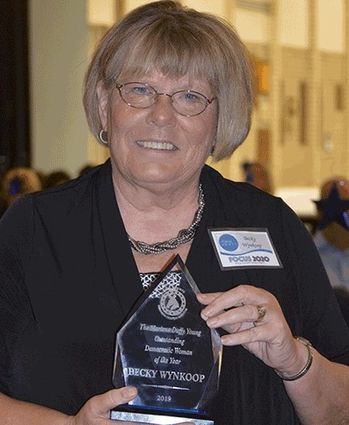 Wynkoop is current president of the Lake Wales Democratic Club and since 1992 has served as a precinct committee person. She also serves on the DEC's Membership and Precinct Organizing Committee, responsible for getting out the vote in the area from Rifle Range Road west of Lake Wales to the Kissimmee River and from Waverly to the south county line.

"It's quite an honor to have someone recognize you for what you do, for what you've been doing for a number of years," said Wynkoop, who was a charter member of the Lake Wales club, the first formed in Polk County. She received the award at the Polk County Democrats Focus 2020 Gala, where her friend, retired Judge Bob Doyel, was named 2019 Lawton Chiles Outstanding Democratic Man of the Year.

In her nomination, David Jones said Wynkoop "played a major role in converting a struggling club to one of prominence that has made significant contributions toward advancing the efforts of the Democratic Party." 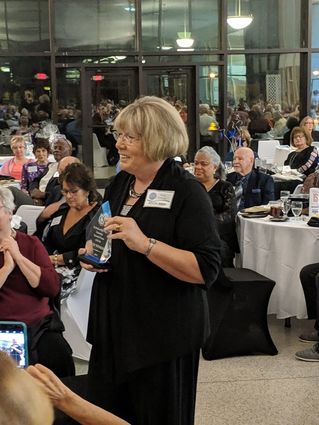 He cited increased club membership, an uptick in activism and more accountability. Adding his support for Wynkoop's nomination, Scott Goodrich cited many of her volunteer roles and said she demonstrates "commitment, passion, empathy, honesty and integrity," characteristics of a leader.

Where there are neighborhoods to be canvassed, calls for candidates to be made or mailings to be prepared, you'll often find Wynkoop, often working steadily behind the scenes. She lends her expertise to candidates, gathers petition signatures and registers new voters, often staffing a Democratic Party booth at community events. Wynkoop said she is always looking for more volunteers and interested people can call her at 863-289-5030 or email [email protected]

Wynkoop said she's involved in Democratic politics because, "I believe in our platform, what we stand for. Basically, that's it. Helping people not with a handout, but a hand up. That's what we should be doing."