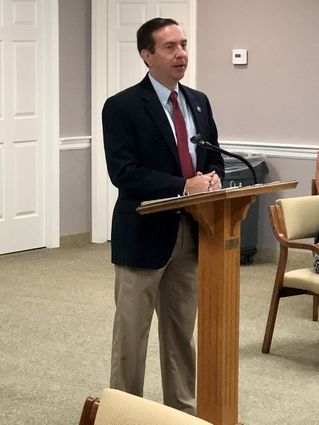 State Attorney Brian Haas has a big job, dealing with more than 43,000 criminal cases annually in Polk, Highlands and Hardee counties. He told Lake Wales business leaders Friday that in any given year his office in Polk County alone may deal with 10,000 felony cases and 50 active first degree murder cases.

Haas was guest speaker Oct. 11 at a Power Breakfast sponsored by the Lake Wales Area Chamber of Commerce and Economic Development Council. He said he enjoyed his eight years in Lake Wales as an attorney for the former Bradley Johnson Law firm prior to re-joining the state attorney's office in 2011; he ultimately rose to chief deputy before becoming state attorney in January 2017. Haas served as a prosecutor from 2000 to 2003 and said he was disheartened to find so many of the same people still in the system when he returned eight years later.

Haas said he has implemented programs to help first-time offenders accused of minor non-violent crimes, especially juveniles, not end up with criminal records that follow them throughout their lives.

"My priority as a state attorney is to make sure our community is protected, to prosecute violent crimes, the ones that cause our citizens to be in real danger," Haas said. "A big priority of mine is protecting our children and making sure if our children are victims of crime, physical abuse, sexual abuse, that we're doing everything we can to see the people who are hurting our kids are prevented from doing that again."

Haas said another focus is on crimes against the elderly: "They become an easy target, people stealing money or pulling scams on them."

Prioritizing is necessary since Haas said his felony assistant state attorneys carry a workload of about 150 cases at one time, while misdemeanor prosecutors may be juggling 300. Haas also has programs to help veterans and the mentally ill get extra support rather than just send them off to prison.

"I want my people to be spending their time prosecuting the violent crimes, the drug traffickers, sellers, the ones who are abusing our children, the elderly. So if someone picks up a first-time offender, pretty minor, I want to put them in one of our programs."

Haas is especially pleased with results of a new program to help juveniles. "I think a mistake is made in that area when you do a one size fits all approach - you can't treat all juvenile crime the same way," Haas said, noting a 12-year-old shoplifter shouldn't be treated the same as a 17-year-old trying to kill people with a gun. Those arrested are now taken on a "therapeutic ride" to a Juvenile Assessment Center to determine which can be offered a special program; since June 2017 more than 2,000 juveniles have completed the program and avoided an arrest record, Haas said.

"When they get down there and successfully complete the program they can come out of there with some help, with some better direction and they don't have that lasting conviction on their record," he said.

Haas also has a special affinity for veterans: "Veterans are really important to us so we've worked on creating a veterans services docket. I can't begin to know the terror and stresses of combat. One of the great things about the program is we've lined up veterans to come in and they serve as mentors and they're right there in the courtroom with them. It's really about getting them the services they need and back on track – that's the least we can do for our veterans who serve their country."

Since his audience was made up primarily of business people, Haas offered advice to help them avoid becoming the victims of crime in the workplace. He said the trusted employee who steals money from the company is usually caught: "We can often figure out who did it but usually by the time it's time to hold them accountable the money is long gone." He suggested periodic audits and cross-training employees so it's not the same person always handling the money and making bank deposits. He also cautioned about giving even a trusted worker all of the boss's computer passwords, and recommended setting up alerts for unusual bank withdrawals or credit card charges.

In addition to financial security, Haas talked about physical safety in the workplace. He suggested they should conduct drills, identify escape routes, install cameras and "Have a plan, be prepared. Know what your employees are doing."

If employees are permitted to bring guns to the workplace, make sure they are trained, Haas said.

"The gun in the hands of someone who's not trained, who doesn't know what they're doing can be more danger than no gun at all. So if you've got guns in your workplace, know who has the guns and know that they're trained."

Haas said as computer crimes are growing, employers need to make sure their workers follow proper security procedures and avoid opening scam emails or those with links that could infect the entire system with a virus, possibly leading to a ransom situation. He noted the cities of Lake City and Riviera Beach ended up paying bitcoin ransoms of $460,000 and over $600,000 respectively when their computer systems were compromised and locked down. Computer criminals who once charged $10,000 or $20,000 in ransom are now charging hundreds of thousands of dollars.

"They wait for panic to set in," Haas said. "The bad thing is when they make the payment there's no guarantee it's going to fix the problem."