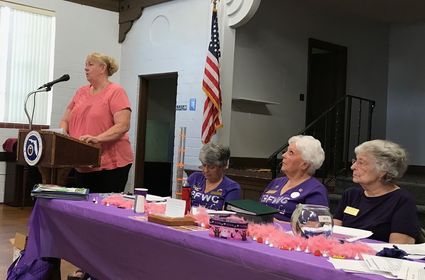 Adverse childhood experiences often have a lasting impact, resulting in negative health and economic outcomes throughout adulthood, according to Dr. Lyn Jones, who has worked with hurting people for many years.

A Babson Park chiropractor and longtime psychiatric nurse, Jones shared her expertise in domestic violence, other abuse and neglect at the recent annual meeting of the GFWC Lake Wales Woman's Club. The Woman's Club has adopted domestic violence abuse and prevention as one of its seven priority areas. Committee chairwoman Jessica Bray explained: "Domestic violence has become so prevalent among all economic stratas. As a woman's club we touch so many parts of families that it's something that we felt we could really do something with. Elder abuse is a really big issue that is really just coming to the forefront. It's a special focus for us and we intend to implement some programs in town because it's domestic violence awareness and prevention. If nothing else the awareness part is something to focus on."

Jones shared a 2016 joint study by the U.S. Center for Disease Control and Kaiser Permanente, which showed how three categories of adverse childhood experiences – abuse, neglect and household challenges – influence health and well-being throughout a person's lifespan. Woman' Club members completed the ACE survey to see how their experiences compared to those of the study participants.

"What the study found is that things that happen to you at a very young age carry with you throughout your entire life. They create the adult person that you are if you don't have any way to intervene with changing behaviors and changing attitudes," Jones said. Those experiences before age 18 can increase an adult's risk for diabetes, heart disease, arthritis, mental illness, domestic violence, sexual abuse and incarceration, Jones said.

In the national study, more than one in five had experienced three or more of the stressors. (See sidebar for questionnaire.)

"The amount of stressors you experience as a child makes all the difference in how healthy physically, mentally, emotionally you're going to be as an adult. The only way to change that is to look inward," Jones said. "If you have three adverse childhood experiences you are 12 times more likely to have heart disease, 15 times more likely to have suicidal tendencies or to attempt suicide. Also early death, you can cut your life expectancy by 20 years."

Jones said: "Emotional neglect has a very strong impact on people especially with young kids whose brains are just growing and developing.

Many children who aren't physically abused or neglected still experience household challenges, like a parent subjected to violence from their partner, substance abuse in the home, divorce or an incarcerated parent, Jones said, noting: "Children soak up everything. You can't hide anything from a kid."

Mental health services are lacking and getting help sometimes still carries with it a societal stigma, Jones said: "Mental health has been shoved under the rug. It's like an unplanned pregnancy or a teen pregnancy used to be. It's something that you hide and are ashamed of. Being abused is something that you're ashamed of. Having someone yell at you and tell you you're no good is something to be ashamed of. But we've got to talk about it. We've got to be more open about it and we have to allow ourselves to heal. It has to happen in all strata of our society."

Jones said public awareness is the key – plus getting adults who had adverse childhood experiences to seek treatment. 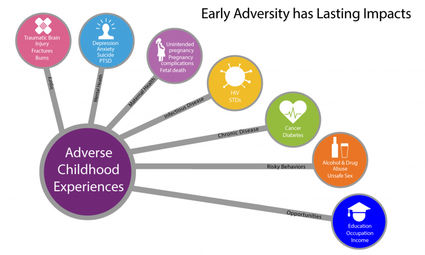 In her introduction, Woman's Club board member Mary Walkup praised Jones, saying: "She's a doctor, but she doesn't treat just the physical. She tries to get to the real root of the problem. There's a lot of things in your life, in your habits that affect your physical well-being."

1. Did a parent or other adult in the household often swear at you, insult you, put you down, or humiliate you OR act in any way that made you afraid that you might be physically hurt?

2. Did a parent or other adult in the household often push, grab, slap or throw something at you OR ever hit you so hard that you had marks or were injured?

4. Did you often feel that no one in your family loved you or thought you were important or special OR your family didn’t look out for each other, feel close to each other, or support each other?

5. Did you often feel that you didn’t have enough to eat, had to wear dirty clothes, and had no one to protect you OR your parents were too drunk or high to take care of you or take you to the doctor if you needed it?

6. Were your parents ever separated or divorced?

7. Was your mother or stepmother often pushed, grabbed, slapped or had something thrown at her OR sometimes or often kicked, bitten, hit with a fist, or hit with something hard OR ever repeatedly hit over at least a few minutes or threatened with a gun or knife?

8. Did you live with anyone who was a problem drinker or alcoholic or who used street drugs?

10. Did a household member go to prison?