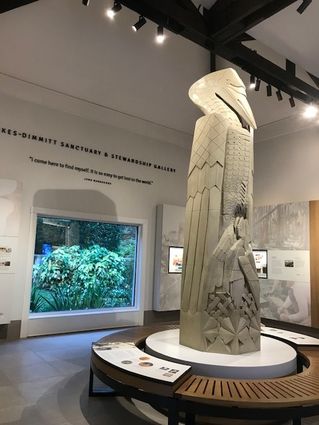 14-foot replica of herons featured on the Singing Tower

Donors, board members and friends of Bok Tower attended a reception Oct. 17 where they got their first look at the $1.8 million renovation, which took about three months to complete. The gallery is named in honor of the parents of Dorothy Jenkins, a major donor from Lakeland.

Bok Tower President David Price thanked all the donors, staff and the contractors who worked on the building. The newly renovated Visitor Center and Chao Exhibit Hall is the final installment of the "Preserve the Legacy, Steward the Future" capital campaign that began in 2014 and has resulted in nearly $18 million in improvements.

"Really this is about Edward Bok's legacy, it's his vision to make the world a bit better and more beautiful but he explicitly said he wanted to create a place here that would inspire people to come here and go back to their communities and do the same," Price said. "He wanted it to be a place of meditation, a place of peace for people to come together and share ideas."

Months of painstaking work went into the construction of the exhibit's handcrafted model of the Singing Tower. Interpretive rails surround the model with touch screen technology offering visitors the opportunity to view the interior of the Tower for the very first time. Visitors are encouraged to take a virtual tour of the Founders' Room and explore some of the other features of the Tower that lie beyond the Brass Door.

One of the most visually exciting exhibits is the large video display that projects slowly dissolving photography on a grand scale highlighting signature images of the Gardens.

Treasures from the Chao Research Center, including some of Edward Bok's personal items, the original Tower key, and nostalgic souvenirs are also on public display for the first time. The historic clavier keyboard takes center stage alongside a silhouette replica of the nearly 12-ton Bourdon bell.

The Lykes-Dimmitt Sanctuary & Stewardship Gallery features exhibits that inspire visitors to reflect on the value of nature's sanctuary and the importance of stewarding it for future generations. The highlight of this gallery is the nearly 11-foot tall replica of one of the sculpted herons found at the top of the Tower. Visitors will be able to see the beautiful sculptural detail at eye level. Three large video screens also provide visitors with information about rare plants, wildlife, and the Gardens' efforts to care for the local ecosystem.

Very much like Edward Bok's search for the nation's top artisans in 1929, current leadership combined creative efforts with the industry's top designers and artisans to create a full sensory experience for 21st-century audiences.

A leader in visitor experiences for cultural attractions, ObjectIDEA served as the project's lead interpreter and designer. With 20 years of experience in the fields of experiential education and interpretive design, ObjectIDEA Founder and President, Matt Kirchman, served as project coordinator. ObjectIDEA worked in collaboration with Brent Johnson Design to envision the display of objects, the array of graphic communication, and the incorporation of audiovisual media. ObjectIDEA is based in Salem, Massachusetts and has worked with prestigious clients, including the National Baseball Hall of Fame and Museum, the Cleveland Museum of National History, the United States Botanical Gardens, and more. 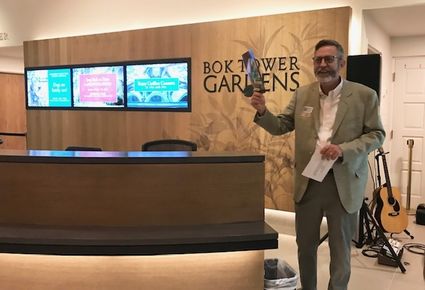