Dedicated in 2006 in Memory of 2 Scottish Dancers 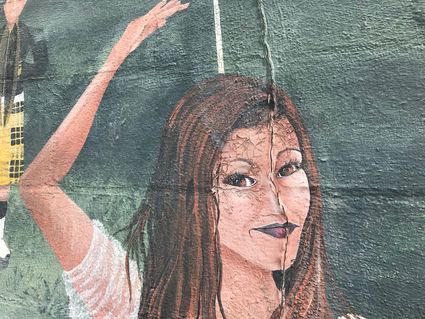 Sam Jones drives from his home in Vero Beach every month to visit the grave of his daughter and stop by the downtown Lake Wales mural of the Highlander Band that contains her likeness.

The mural was dedicated in April 2006, one year after Amber Jones and her best friend Alena Violette died in a tragic car crash on their way back to Florida State University where the 18-year-olds were freshmen. Amber and Alena were Scottish dancers featured front and center in the mural.

Jones asked the city to do something about the deteriorating condition of the mural: "There are 26 murals in this city and only this one is in bad, bad shape."

The 62 by 16 foot mural on the west side of Park Avenue Hair Salon at the corner of Park Avenue and First Street was painted by local muralist Lisa Moore and funded through the nonprofit Lake Wales Mural and Enhancements society. News articles of the dedication said the mural would cost $10,000.

Jones said he had been complaining about the mural's condition for about a year and a half. He said he raised $15,000 to pay for the mural, which was never coated with ultraviolet protection, and he felt there should be money still available to restore it.

City Manager Ken Fields said even though the murals are on private property and not originally paid for by the city he would look into the matter: "We've talked about the murals being one of the assets of downtown and of course we want to preserve them."

Fields said he would reach out to Lake Wales MainStreet, the nonprofit group that supports the historic downtown, to discuss the murals.

Zailet Suri, an assistant to the city manager, said she was told the mural restoration was delayed because the original artist had been ill and had some other family issues.

Former Lake Wales Mayor Cliff Tonjes, who spearheaded the mural project, confirmed that Moore had been ill but the Highlander Band mural, which is located across the street from his hardware store, was next on the list for restoration. He said the mural society did have some funds available for upkeep, and he expected the band mural restoration would be done within two to three months. 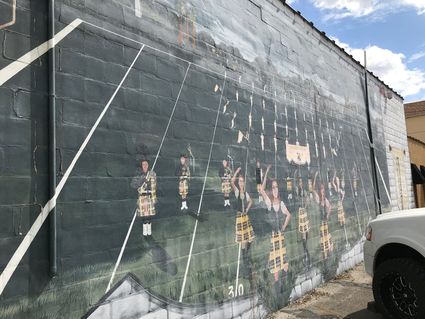 "I appreciate Sam's relentlessness in getting things done. He has been on it for a while," said Kim Johnson, Amber's mother.

Jones also told city commissioners that while he appreciated the mural honoring the memories of Amber and Alena he hoped any restoration would make the faces more closely resemble the two girls. He said Moore admittedly did not specialize in portraits so he would like to see the girls' likenesses possibly recreated by another artist, like Nikki Nichols, who painted the murals on Park Avenue depicting Jessie Williams and the McLaughlins.

Johnson said she is thankful that there is renewed interest in the murals and would be fine if the girls' likenesses remain the same and are just refreshed: "I'll be a proud mama. Even if it's the same I'll still be fine. Who can complain when your baby's on the side of the wall?"