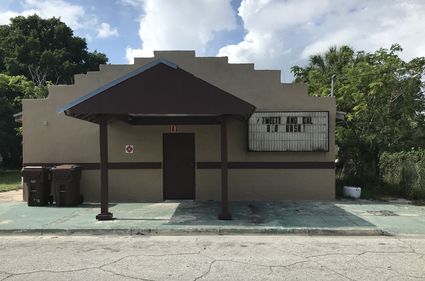 Elks Carillon Lodge on B Street

Jones stepped in after Elks Exalted Ruler Terry Christian complained to the city commission Tuesday, Nov. 5 that he felt six police officers showing up at the lodge Saturday night was a waste of city resources and that the officers' aggressive demeanor created a hostile atmosphere. After seeing a promotional flyer on social media the police also brought in a city code enforcement officer and an agent with the state Division of Alcoholic Beverages and Tobacco.

The Lincoln CDC formed last month to support the redevelopment of the northwest business district. The Elks Carillon Lodge 880 is located at 147 B Street, a block away from Lincoln Avenue.

"If there is distrust between business owners and law enforcement more business owners are not going to want to come in, investors are not going to want to come in. I think this is problematic," Jones told the commission. She said it concerned her that police didn't reach out to Christian: "Instead there was an explosive situation that didn't have to be that way. It reflected poorly on the optics for Lake Wales. It reflects poorly on the Northwest section, particularly at a time when the city just developed a plan to redevelop that area and we're trying to bring business and encourage people to utilize that portion of the city and invest in that portion of the city."

Police Chief Chris Velasquez said he didn't believe six officers was excessive, given the Lodge's nightclub-like atmosphere that attracted more than 100 people. Velasquez said he is willing to sit down with Jones and Christian but that he still has concerns that the Elks Lodge might not be following state guidelines regarding liquor sales by fraternal organizations.

"Whenever there is an alcoholic beverage license there is a significant responsibility that attaches to that," Velasquez said. "It's very, very important that the law is followed to a T, that it's not exploited, it's not misused, it's not misrepresented.

At issue is whether the Elks can collect $5 to $10 at the door and issue temporary "social action memberships," allowing guests not invited by specific members to purchase alcohol. Velasquez says that's more like a club cover charge and skirts proper protocol where guests are vouched for by existing members and go through a vetting process to become members. State ABT Special Agent Cristobalo Reyes said he didn't issue any citations Saturday, but he still is investigating whether how new memberships were handled met the intent of the law regarding fraternal organization alcohol sales.

A video posted to social media showing police officers inside the lodge generated many comments about the police presence. The video can be viewed at https://www.facebook.com/terry.christian.7712/videos/10103228296784611/

City Commissioners Terrye Howell and Curtis Gibson both called on City Manager Ken Fields to make sure Chief Velasquez resolves the conflict. Commissioner Al Goldstein said he wanted the parties to move forward and not allow the disagreement to become racial. Fields said he is willing to work with Christian, but also wants to make sure he is operating within the law and not negatively impacting the neighborhood.

Howell, who except for one year has been on the city commission since 2005, expressed frustration that Christian, who has in the past addressed commissioners about concerns, again felt the need to bring his complaints to the commission.

"I've asked for a hundred years that you need to work it out. If Mr. Christian was doing something illegal, put him in jail. If he's not, why are you bothering him?" Howell said, noting she is an Elks member and the Lodge is providing a much-needed place for people to socialize. She said she felt the city could resolve parking issues and other concerns.

Deputy Mayor Robin Gibson stayed quiet and Mayor Eugene Fultz, apparently expecting the conversation to become heated, started the public discussion portion of the meeting with a reminder of the rules of engagement, rules of civility in the commission chamber: "We may disagree but we will be courteous and respectful of one another. We will not engage in personal attacks. We will direct all communication to the issue under consideration."

In addition to discussing the Saturday incident, Christian pointed out that his organization had taken it upon themselves to clean up the area of long-term abandoned vehicles and other trash and to install donated sod, which he said prompted another "aggressive" law enforcement interaction: "We got sick of it, we decided to take our street back."

Jones, an attorney, said she reviewed Christian's liquor license paperwork and correspondence with the state and felt all was in order. She acknowledged that the promotional flyer for the Nov. 2 event – a birthday party for Tweety and Cal and grand reopening of the Elks Lodge – had a distinctive "urban" feel, more like a nightclub ad, while also promoting renewal of memberships.

"People were told by law enforcement that he was bringing bad people to Lake Wales, that it looks like an urban nightclub," Jones said. "I think there are some stereotypes at play that I would like to debunk."

Deputy Police Chief Troy Schulze said police were being proactive because of past issues with the Elks Lodge. He said previously the police had to deal with complaints about noise, with the lodge open from 10 p.m. to 2 a.m. in a residential neighborhood, and also issues with parking on private property and vehicles blocking the street making it difficult for emergency vehicles to pass. 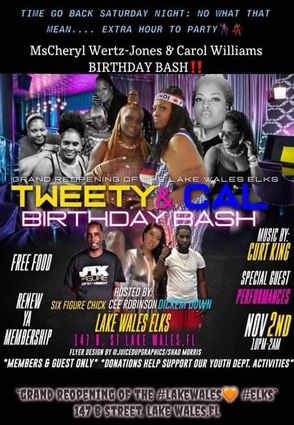 "We just want the business to be run so it doesn't create problems for people around it," Schulze said. "We either sit back and wait for the call to happen, or take a proactive approach."

City officials suggested Christian might hire off duty police officers for security, a move Jones said she also recommends as long as the officers assigned really want to help.

Velasquez said he hopes Christian will operate more like a lodge, with meetings and social activities for members. He would like to resolve the issues – within the law.

"We always take the high road. We always try to. We don't want to have tension," Velasquez said. "We've worked so hard to build and strengthen those relationships. It's just a tremendous liability for him and tremendous responsibility. We're just trying to keep everyone safe."