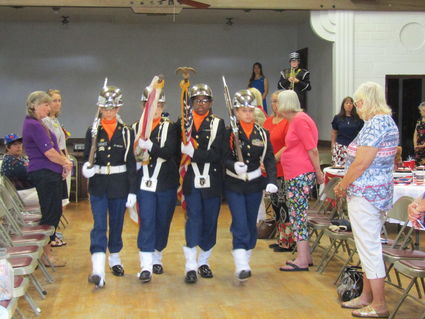 As everyone was preparing to honor Veterans for Veteran's Day, the GFWC Woman's Club of Lake Wales was gearing up to carry on their traditions and dedication to serving the Veterans in the Community through some very special means.

On Wednesday, Nov. 6 the Woman's Club House began to smell heavenly with the delicious aromas of spaghetti sauce and garlic bread. The tables were decorated in red, white, and blue and awaited the guest who were to fill them for the "Take A Vet to Dinner" event. A $7.50 donation bought a ticket to a wonderful spaghetti dinner, salad and garlic bread, and a selection of homemade desserts with iced tea or coffee. People had been encouraged to buy an extra ticket and donate it back to a Veteran so that some of our local Veterans could receive a free spaghetti dinner. Of the tickets sold, about 172 dinners were served that night and approximately 37 free dinners were purchased for a Veteran. Over half of the guests who filled the tables were Veterans who came to support this worthy cause.

But the ladies did not stop there! The monthly General Meeting held on that Thursday, November 7th, will always hold a special memory for all who attended. "Lest We Forget" was the theme for the day and the Program was to honor all Veteran Women both past and present.

As the ladies entered the building, they could see that the tables were decorated in patriotic themes by five young 4H students under the tutelage of our friend, Stephanie Eckstein. These young people were competing for the honor of being the winner of the coveted special prize given by the Woman's Club for their innovative designs. The chairs were lined up down the center of the hall to make room for the special Honor Guard to come. The ladies had invited guests to attend and anticipation filled the air because this was promised to be a very special event!

The call was made to be seated for the Program promptly at 10:30 a.m. and everyone was silent in anticipation of what was to come. The main doors opened and the Lake Wales High School JROTC Color Guard, solemn in their uniforms, entered with Flag and rifles at ready. Everyone was asked to stand for the Presenting of Colors and "I Am the Flag" was read. "I am the flag of the United States of America. .....I embody American freedom: freedom of speech, religion, assembly, the press, and the sanctity of the home. .....God grant that I may spend eternity in my "land of the free and the home of the brave" and that I shall ever be known as "Old Glory", the flag of the United States of America".

After the Colors were posted, the haunting strains of "Taps" filled the air as Lake Wales Highlander Band trumpet player, Riley Alexander, played the sad melody at the MIA/POW "Missing Man" Table. Stephanie Eckstein explained in reverent tones, that the small table set for one, represents the frailty of one prisoner, alone against his or her suppressors. Each of the 4H students presented the symbols placed on the table as Stephanie explained their meaning – a single red rose, the yellow ribbon, a slice of lemon, a pinch of salt, the Holy Bible, the lighted candle, and the inverted glass – all showing our everlasting concern for our POW/MIAs

The Color Guard folded the Flag and the Meaning of the 13 Folds was read: (1) the symbol of life, (2) the belief in eternal life, (3) the honor and remembrance of the missing Veteran, (4) the weaker nature of man, (5) the tribute to our country, (6) where our hearts lie in our pledge to our country, (7) the tribute to all armed forces, (8) the tribute to the one who is missing and the honor of the mother who bore him, (9) tribute to womanhood, (10) tribute to the fathers who give their sons and daughters to the defense of our country. (11) the glorifying of the God of Abraham, Isaac and Jacob, (12) the representation of the emblem of eternity and glorifying the Trinity, (13) "In God We Trust" completing the solemnity of the folds.

The Flag was then placed on the Missing Man Table and the "Slow Salute" was made to honor the one who cannot be with us. As the Colors were retired, the hall was filled with the chilling sounds of "Amazing Grace", played by Lake Wales Highlander Band Bagpiper, Yavier Fuentes.

As the main part of the Program was concluded, there wasn't a dry eye in the house! Everyone was reminded of the sacrifice of our Women Veterans by the poem "Our War" by Diane Carlson Evens.

As the ladies remained seated, two very special speakers were presented. Peggy Brown was a Code Carrier for the Coast Guard during WWII. In her nineties now, she has been interviewed for the Library of Congress in Washington, DC. She described in humorous tones, the work she did in the defense of her country in a time when women were normally homemakers for the men who went off to war. Still able to wear her uniform, Peggy reminded us that women are Veterans too! 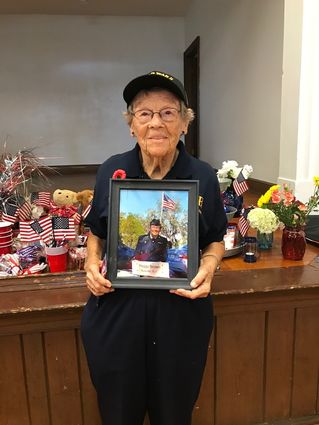 Kathryn Gates-Skipper is one of the Woman's Club members and she spoke about her days in service to her country. "I was born in Tripoli, Libya North Africa," Gates-Skipper explained. "So you can say I am a true Marine, I was born in the shores of Tripoli, just like the Marine Corps hymn." It seems it was destiny for her to wear the uniform as Kat was the first enlisted woman Marine to be involved in combat operations, and she helped train women soldiers in Kuwait during Operations Desert Shield and Desert Storm. "I don't care if you're a Democrat, Republican or Independent. Every American should honor our veterans. They should be glad that they're here, that what country we do have is still free," she said. "They should be very blessed and glad and they need to thank a veteran for that."

The GFWC Woman's Club of Lake Wales is honored to follow one of the General Federation of Women's Clubs Seven Grand Initiatives in focusing on women in the military, as well as supporting and advocating for our troops. The Club has Women Veterans and military wives and widows in their midst, and they are ever mindful of the special place in their hearts for those who gave all for their country – "Lest We Forget"!

Who then has worn my boots?

And whose memories are these,

And he knows that I love in no greater way

than to share in his life or his death.

What are the rules?

we are prey to suffer and survive together.

I’ve been through war’s hell and if only you will listen,

I’ve a story of those chosen to sacrifice for us all.