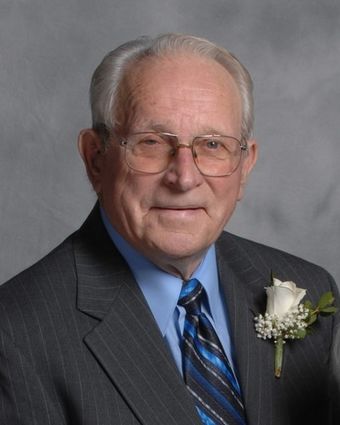 After graduation from Tonica High School, Jack served from 1944-1946 in the U.S. Army. He achieved the rank of Staff Sargent, serving in the Pacific Theater including the occupation of Japan. He became a member of the American Legion chapter in Tonica. Upon Honorable Discharge from the Army, he returned to the family farm. Jack, his brother Bob, and their father Howard worked the family farm as a partnership all their lives. The farm has remained in Ashley Family ownership for over 150 years.

Jack married his lifetime companion, Rita (Gieger) and they have celebrated 71 years together. They have three children: Catherine, John, and David.

Jack was much more than a farmer. He found time to be a Boy Scout leader, and took his family to Philmont Scout Ranch in Cimarron, New Mexico for training. The following year, he participated as a scout leader at the 1967 World Jamboree in Utah.

He earned an Amateur Radio Operators license and was a member of the Starved Rock Radio Club.

Always interested in aviation, in the 1950's he built radio controlled model airplanes. While model airplanes were fun, he and his brother Bob earned Private Pilot licenses and owned a small plane in a home built hangar on the home farm.

Upon retirement, and after much travel and study, Jack and Rita retired to Saddlebag Lake Resort in Lake Wales.

Rita and Jack have spent 40 wonderful years in Saddlebag. They have many activities and have made many friends there. Jack was a member of the Tennis Club for a time, and lately had a great time with the Horseshoe Club.

Jack is a Master Mason, 32nd Degree Consistory and a member of the Peoria Shriners.

Jack lived his life to the fullest. His example of service to his community and nation shines bright. His love of his family was foremost in his last days.

He is survived by his wife Rita (Gieger); a daughter Sister Marie Catherine of the Carmelite Monastery in Loretto, PA; son John (Susan) of Akron, OH; son David (Karen) of Downs, IL; grandson Bryan (Mallory) of Madison, WI; and grandson Bruce of Normal, IL; his sister Anne of Port Angeles, WA; his sister in law Emmy of Tonica, IL; and numerous nieces and nephews.

Preceded in death by his parents, Howard and Frances; his brother Bob; his sister Jean, and his nephew Bob Jr.