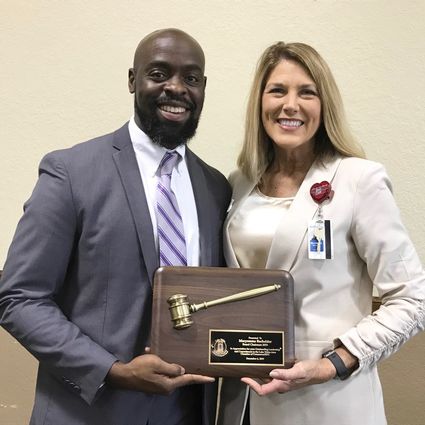 Lake Wales Area Chamber of Commerce and Economic Development Council Board Chairman Maryemma Bachelder celebrated a successful year at the annual holiday luncheon Dec. 6 as she prepared to turn the reins over to Andy Oguntola.

Past board chairmen, formerly called presidents, lined up in date order for the annual tradition of passing the gavel. First in line this year was Edwin Friedlander, who was Chamber president 60 years ago in 1959. Oguntola has the distinction of becoming the first African-American chairman since the Chamber was formed in 1915.

Oguntola is director of Polk State College's J.D. Alexander Center in Lake Wales. Several of his colleagues were present, including his former boss Martha Santiago, who is now a Polk County commissioner. 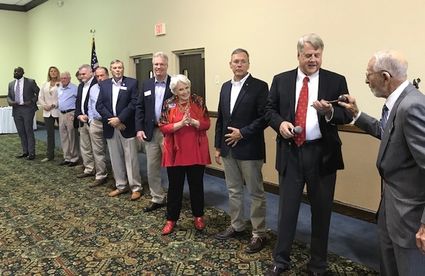 Bachelder, the director of community relations for AdventHealth Lake Wales (formerly Lake Wales Medical Center), talked about the year's successes and a few things she might have done differently. She recognized Brian Marbutt of Citizens Bank & Trust with the annual Chairman's Award and thanked outgoing Chamber Board members Lawrence Epps and Gio Fazzini for their years of service.

The Gnats chorus from Dale R. Fair Babson Park Elementary performed holiday songs to get the crowd into the spirit of the season.

Oguntola said he was looking forward to the coming year and that he had big shoes to fill, following Bachelder and other past chairmen. He presented her with an outgoing president's plaque and thanked her for her service.