The Lake Wales hospital cafeteria filled with people Sunday bidding a fond farewell to Dr. James Nelson and his wife Janie, who are moving to Southwest Georgia.

There were hugs, tears and stories about what the doctor meant to them and in some cases how he saved their lives. Former patients talked about the deep relationships Nelson built, taking time to talk about not only health issues but their shared faith in Jesus Christ. Several related how Nelson helped them through difficult times and prayed with them.

A large contingent of doctors and other medical professionals joined friends, family and patients at the farewell reception.

"Dr. Nelson has been taking care of patients in our community for 33 years, and we know how deeply loved and respected he is," said Rebecca Brewer, Chief Operating Officer at the hospital. "Our community will miss him, and we wish him well in his retirement." 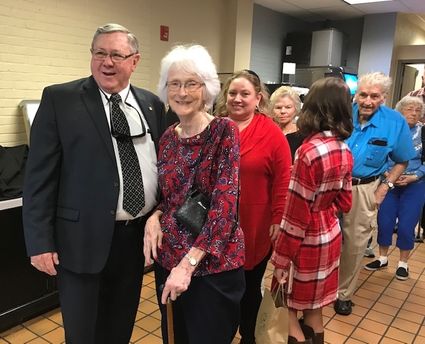 Brewer noted that Nelson had seen 120,000 patients in his career.

The Nelsons' daughter-in-law Kelly, who has been married 35 years to their son Jimmy, talked about their special relationship and sang "Great is Thy Faithfulness." Earlier she and trumpet player Charlie Topp Hines entertained the gathering crowd, who lined up to offer hugs and goodbye messages.