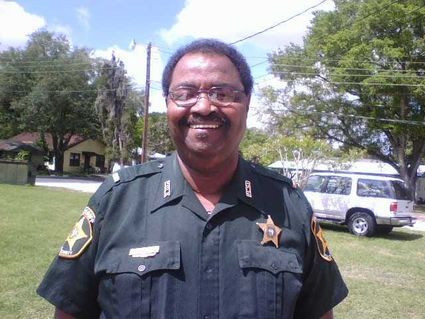 The life of David McArthur Smith Sr. was celebrated Dec. 21 by a large crowd filled with his law enforcement brothers and sisters and many, many friends. Sheriff Grady Judd told of his close working relationship with Smith, affectionately called "Junebug."

Smith was born April 14, 1942 in Lake Wales to Georgia (Kicklighter) and David Smith. He graduated from Rochelle High School in the class of 1961, and received an associate of arts degree from Gibbs Junior College , now St. Petersburg College. One year after graduation he entered the police academy.

Smith began his public safety career in 1965 as a patrolman with the Lake Wales Police Department. In 1968 he made history by becoming the Polk County Sheriff's Office's first African American uniformed patrol deputy. He retired in 2002 after a 33-year law enforcement career. After retirement he continued donning his green uniform to do funeral escorts. He served on the board and as a vice president of the Florida Association of Deputy Sheriff's. He retired as a lieutenant.

From 2010 to 2016 Smith served as president of the Lake Wales NAACP branch, which placed him at the heart of many local issues and political campaigns, where he personally gave his time and energy. 2005 he received the Burney Brinkley Award for outstanding service in the field of law enforcement and was named Citizen of the Year in 201 by the Upsilon Xi Chapter of Omega Psi Phi Fraternity for outstanding contributions to his community and the welfare of mankind.

Smith worked as an ambulance driver and attendant for the former Hewing Funeral Home as well as assistant leader of Troop 94 of the Boy Scouts of America under the late Ambrose Randolph.

At an early age Smith was baptized at Allen Temple A.M.E. Church, where he remained throughout adulthood. He served in many capacities, including past Pro-Tem, associate member of the Women's Missionary Society, Lees Chorus, the Male Chorus, and the past district coordinator for the Sons of Allen, Lakeland Lively District. Former Allen Temple pastor the Rev. James Cleare, who now ministers in Jacksonville, offered the eulogy.

The Polk County Sheriff's Honor Guard served as pallbearers. The service was held at 2 p.m. at First Baptist Church of Lake Wales to hold the overflow crowd. Interment was at Willow Lawn Cemetery in Lake Wales. Epps Memorial Funeral Home was in charge of arrangements.

There is a train at the station with a seat reserved just for me. I’m excited about its destination as I’ve heard and know, it sets you free. I hope that you will be there to wish me on my way. It’s not a journey you can join in, it’s not your time today. There’ll be many destinations – some are happy, some are sad; each one a brief reminder of the great times that we’ve had. Faye, I know is waiting, she took an earlier train, to greet and reassure me that nothing’s really changed. One day you’ll take this journey, on the train, just like me. I promise that I’ll be there at the station, waiting with care. Don’t cry and don’t worry. I lived a blessed life. Farewell – until then, I am free at last, free at last, thank God almighty, I’m free at last!