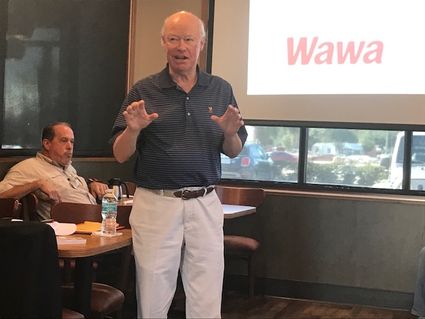 A Wawa convenience retail store manager who completes 25 years can retire a multimillionaire because of the company's lucrative profit-sharing program, according to George Wood, who will become the company's chairman of the board next June.

Wood will take over from his brother Dick, who is also his next door neighbor in the exclusive gated community of Mountain Lake, just outside the Lake Wales city limits. The brothers are the third generation to own homes in Mountain Lake, and Wood remembers fondly his time spent here as a boy.

Speaking to the Kiwanis Club of Lake Wales Dec. 16 Wood credited Wawa's people and the company's commitment to servant leadership as driving forces in the Pennsylvania company's explosive growth. The company is on track to open 60 stores a year to soon reach 900 stores, most in New Jersey, Pennsylvania, Delaware, Virginia, Maryland and Florida. Combined annual sales now exceed $10 billion.

Wood said Wawa first explored moving into the Florida market in 2005, but plans got shelved due to the recessionary conditions in 2007 and 2008. Wawa is now fully committed to Florida, which Wood said is growing by 1,000 people a day, many moving from the mid-Atlantic where people are familiar with Wawa. The company opened its 200th Florida store in 2019, and its website shows 11 scheduled to open in 2020. In addition to the Lake Wales store on an outparcel of Eagle Ridge Mall on U.S. 27, which opened in December 2018, Wawa operates five stores in Polk County, two in Lakeland, one in Winter Haven, one in Auburndale, and one in Davenport.

"We knew this was a great market for us. The people were here. The environment was here," Wood said.

Wawa is a private, family-owned company started in 1964 by Wood's uncle Grahame. The dairy farmers realized their milk home delivery business would soon be extinct, so they decided to open a food market. The family first had an iron foundry in New Jersey and then in 1902 Grahame's started processing milk from their dairy farms.

Unlike other large private chains whose family members run the company, the Wawa owners hire professional management, a distinction Wood said has been a formula for success. The company employs about 38,000 people, called "associates," and works hard to ensure they feel valued. He challenged those at the Kiwanis meeting to visit a Wawa and ask associates whether they like working there, suggesting he would expect a positive response.

Wood family members maintain control of the company, with about 41 percent of the stock shared by associates. Wawa is in the process of building a corporate training center to further promoting the company's commitment to servant leadership and its core values: Value People, Delight Customers, Embrace Change, Do the Right Thing, Do Things Right and, Passion for Winning.

"Wawa" is a Native American word for Canadian goose found in the Delaware Valley more than 100 years ago. The original dairy farm was located in a rural section of Pennsylvania called Wawa. So the company logo includes the silhouette of a Canadian goose.

"We use the analogy of the wind under our wings to take us to great heights," Wood explained.