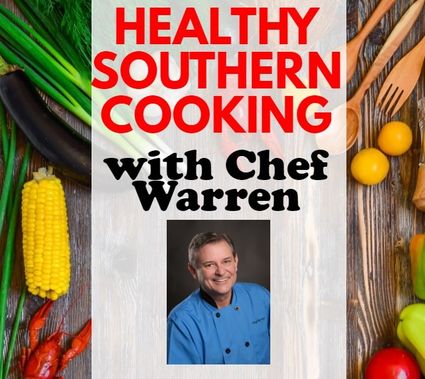 My, how quickly things change. Just a few short years ago, restaurants were booming and cooking at home was something one watched on TV, but rarely attempted in real life. Then something shifted. In a big way. Perhaps it was the economy. Or a desire to eat healthier. For whatever reason, people wanted to rediscover the joy of cooking.

Recognizing that need, Chef Warren Caterson of Sarasota wrote the award-winning cookbooks Table for Two – The Cookbook for Couples and Table for Two - Back for Seconds (Winfield & Scott Press) each featuring over 235 recipes using fresh and readily available ingredients. Now he has taken his passion on the road with an entertaining and energetic presentation that will inspire your inner chef while tickling your taste buds.

Join Chef Warren as he shares recipes and cooking tips for preparing Healthy Southern Cuisine. Southern Cuisine is often thought of as heavy, fried, saucy and gravy laden. Chef Warren will debunk that notion with tips on cooking a lighter southern fare.

Chef Warren then ends each presentation with a cooking demonstration, preparing a healthy entrée that anyone can replicate in their own home in less than15 minutes

Healthy Southern Cuisine is sponsored by Florida's Natural Growers Foundation and the Lake Wales Library Association. Chef Warren's program is free and open to all. To RSVP call 678-4004, ext. 221.