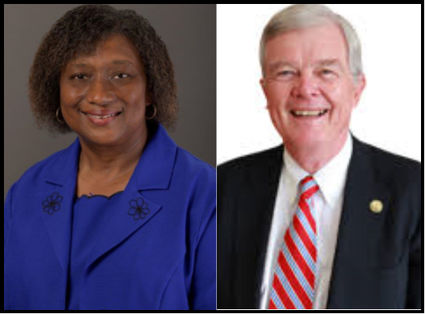 The regular municipal election for the City of Lake Wales will be held on Tuesday, April 7 to elect commissioners for Seats 3 and 5. Both incumbents, Terrye Howell in Seat 3 and Robin Gibson in Seat 5, say they plan to seek re-election.

Howell has been a city commissioner since 2005, except for one year when the district boundaries changed and her new seat was not yet up for election. Gibson was first elected in 2016 and then re-elected without opposition in 2018. Voters last year changed the term of office from two years to three.

Qualifying will begin at noon Feb. 17 and end at noon Friday, Feb. 21. Candidate packets will be available for pickup in the city clerk's office starting Friday, Feb. 7.

To qualify to run for a commission seat the candidate must be a registered voter, have been a resident of the City of Lake Wales for at least one year and reside in the district of the seat they are seeking.

During the qualifying period candidates must submit paperwork indicating they have opened a bank account and naming a campaign treasurer. They also must be nominated to run by collecting signatures of 25 qualified voters who live within their district.

Commissioners are elected at large by all city voters but must live in the district they serve. Candidates for Seat 3 must live in district 122 and for Seat 5 must live in District 28. A map with commission district boundaries can be viewed online at https://www.lakewalesfl.gov/DocumentCenter/View/1180/District-map-2012-Model-1?bidId= or in the city clerk's office at the City Administration Building, 201 W. Central Ave.

City commissioners currently are paid $4,817 per year. They also are eligible for city health insurance and the same annual cost of living increase given to other city employees. The city pays for commissioners to travel to attend training conferences, but doesn't reimburse for local travel.