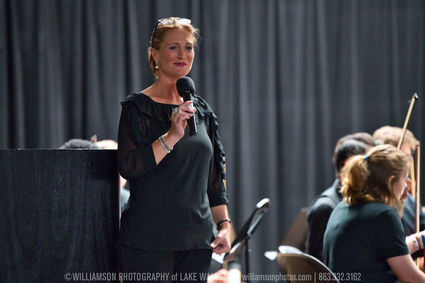 Meg Smith calls herself "the luckiest girl in the world." She says she's filled 10 bucket lists by being blessed to play her violin with the likes of famous musicians Yo-Yo Ma and Itzhak Perlman and for noted composer John Williams. For nearly a decade she's played in the orchestra on tour with opera singer Andrea Bocelli, whose voice is considered one of the finest in the world.

Smith's newest endeavor is directing an adult stringed orchestra sponsored by the Lake Wales Arts Council. The group of about a dozen musicians started playing together in the fall, and they are looking for others to join them for the spring season starting Monday, Feb. 3.

"We wouldn't like to be huge, but 25-30 would be great," Smith said. "When there are more instruments it has a better round sound to it and there's not so much stress on one individual person."

Anyone who has graduated high school and can play a violin, viola, cello or bass is welcome, Smith said, noting there are no upper age limits.

"We're welcoming everybody," Smith said. "Even if they haven't played in 20 years they can give it a try. I'm certainly not going to turn anybody away."

Smith says string musicians have more opportunities on the west side of the county with the Imperial Symphony Orchestra and the Florida Philharmonic.

"We're hoping to offer the eastern side of Polk County something where they also have the opportunity to not have to drive so far," Smith said. 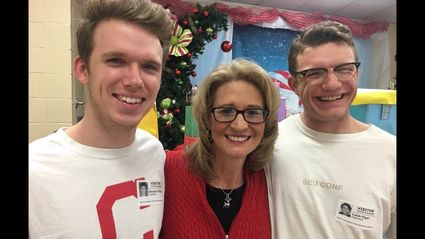 Meg Smith with two of her students

Smith grew up in Chicago in a musical family and her father, Rodger Coburn, actually helped establish the Lakeland Florida Philharmonic Orchestra. Her father was her first music teacher and Smith went on to start her own studio, teaching classes while still in high school. She completed her degree at University of Wisconsin with a full scholarship and no college debt. She has taught for several schools and colleges and has worked 14 years for the Lake Wales Charter School system, where she now teaches strings at Bok South and Janie Howard Wilson, Polk Avenue and Babson Park elementary schools. Two of her former students got their music education degrees and teach at Hillcrest Elementary and Lake Wales High School.

People interested in the community orchestra should just show up with their instrument and a pencil at 6:30 p.m. on Mondays at the Lake Wales Arts Center, 1099 SR 60 East. Chairs, stands and music will be provided.

Smith said her parents advised against her becoming a professional musician but she has been blessed by the experience: "It's a hard go of it, but I never in my lifetime could have imagined all of the phenomenal people I've been able to make music with."