Sheriff Thanks Him for Protecting and Saving Others 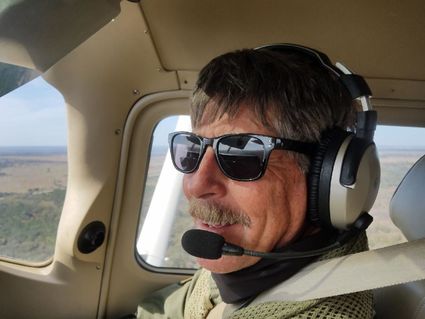 Turning just 60 this year Love actually will continue flying as a sheriff's reserve deputy and as a pilot with the U.S. Department of Agriculture.

The sheriff who hired him, Lawrence Crow, and current Sheriff Grady Judd showed up to recognize Love's service along with family, friends and co-workers at a luncheon held inside the aviation warehouse in Bartow with two helicopters and a small plane as a backdrop.

Crow joked that Love once saved his life by auto rotating and making a controlled landing after shutting off the helicopter's engine. Crow said he asked Love what would happen if the engine failed and Love decided to show him instead of just tell him.

Judd called Love's retirement "an exciting day on one hand and a very depressing and sad day on the other."

He said Love "dedicated so much of his life to helping and protecting and saving others. As air support he also protected and saved our deputies on the ground. You can't measure how many of our deputies weren't injured or weren't killed because he was there, because you can't measure the absence of something that just obviously doesn't occur."

Love's former major in the aviation unit, Francis Hart, presented him with a handmade, engraved knife, noting Love's service had been "a wild ride." Love credited Hart with helping him transition from being an Army Ranger to a sheriff's deputy, a job he started on Jan. 30, 1995. Love also was presented with a leather jacket, a photo-wrapped tail rotor and two plaques, including one as a "broken wing" award recognizing the skill and judgment he used in successfully landing his helicopter March 23, 2016, during an in-flight emergency when the engine failed.

Love was called "the patriarch of the aviation unit," someone who was counted on for good advice

Love's crew presented him with an original painting of a flock of turkeys by Tom Freeman, who was Love's art teacher growing up and a longtime friend. Love recognized the 94-year-old Freeman as a World War II veteran, which drew appreciative applause from the assembled group. 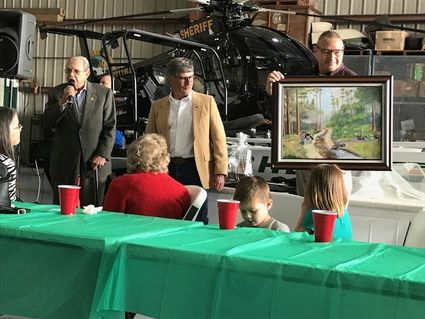 Freeman was also his high school assistant principal and Love noted: "He had to put the board of education on me a few times."

Love was obviously moved by the outpouring of love and friendship.

"I thank God for everything He has blessed me with and I've been blessed beyond belief," Love said, also thanking his family, most of whom were able to attend the celebration. He said he appreciated being able to serve "the greatest nation in the world. I've always been proud of that."

He advised his unit pilots to maintain the high standards he set: "I was tough on you all, but it was for a reason, never anything personal." He said high standards are especially important to helicopter pilots because "You can't park that thing on a cloud."