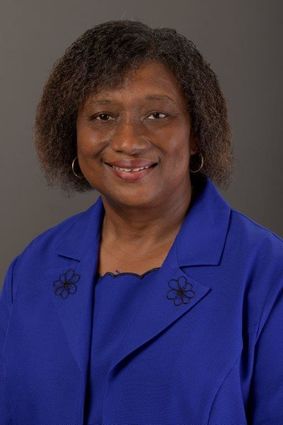 When Lake Wales City Manager Ken Fields asked in February 2019 for a change to his retirement account contributions, City Commissioner Terrye Howell was happy to make the motion to approve it. After all, Fields stated that the fiscal impact for the year would be just 2.6 percent or about $3,560, an increase she felt was reasonable.

"I feel like the city manager wasn't truthful and I don't like that," Howell said. "He didn't give us all the information we needed."

At the Feb. 5, 2019 meeting Fields told the commission he would forego a salary increase and bonus to offset the cost of the city helping him reach the annual "allowed IRS maximum" in his 401(A) retirement plan. He received a 2 percent raise and 2 percent bonus in 2018 and a 2 percent raise and 1 percent bonus in 2017. Fields said the city also could divert the five percent (actually eight percent) they had been contributing to his 457 deferred compensation plan into the 401(A). He failed to mention the IRS maximum was $56,000, and no one asked. Fields himself prepared the agenda memo with the estimated 2.6 percent cost.

Based upon the agenda memo stating the fiscal impact of the change was estimated at $3,560, Howell started making the motion to approve the change: "Move approval of $3,000-plus dollars in addition to what he's already making . . ." Fields interrupted her and said the motion should just be to approve the contract amendment. The motion passed 5-0.

"We did vote to approve going to the IRS maximum, without being told the actual amount, but saying it would only cost about $3,500 was misleading. I expect our city manager to give us the facts," Howell said. "It is disturbing to me. If he was going to collect a lot more in his pension than what he told us it would cost he should have brought it back to the commission."

Howell said she is asking Fields for an explanation. (NOTE: See his response in gray box to right of this story.)

Fields declined to respond when asked how he calculated the estimated fiscal impact, why he did not disclose the IRS maximum and whether he was attempting to downplay or hide the actual cost. Mayor Eugene Fultz did not respond to questions emailed to him, and Deputy Mayor Robin Gibson said he preferred to comment only at commission meetings, where he also could hear the thoughts of his fellow commissioners.

Fields' amended contract doesn't include any dollar figures, but says he would pay five percent of his salary into the 401(A) and the city would be responsible for a contribution that would bring the total to the IRS maximum. But Fields' 2019 earnings statement shows the city in two payments contributed $50,203 to his 401(A), which with Fields' 5 percent of $7,607, brought the total to $57,810, which is $1,810 over the IRS maximum allowable. City Human Resources Director Sandra Davis said with an extra paycheck in December there was a timing issue and the extra $1,810 in city funds was credited in 2019. The overage was included in Fields' 2019 W-2 issued for tax purposes, but he did not report the overpayment to city staff. City Finance Director Dorothy Abbott said she was unaware of the overpayment and would need to put some safeguards in place to make sure it was corrected and couldn't happen again.

City Commissioner Curtis Gibson said he definitely feels misled and it makes him wonder if the city should have an independent review of all payments ever made to Fields' retirement accounts.

"Actually I think he should pay the city back at least $10,000 and we should revisit whether we want to lower our annual contribution," Gibson said. "Fifty thousand dollars is a lot of money, and frankly I'd like to do more for our lower paid employees."

When Fields was hired in 2013 he opted out of the city pension plan in exchange for creating a 401(A) retirement account and the 457 deferred compensation plan. His contract called for the city to contribute eight percent to his 457 plan plus whatever percentage they contributed for employees in the general pension plan to his 401(A). In 2017 he convinced commissioners instead to contribute to his 401(A) the average percentage of the city's three pension plans. The percentage for police and fire pensions is significantly higher than for the general employees. Currently the percentage contributions are 7.7 percent for general employees, 16.7 percent for police and 26 percent for fire. 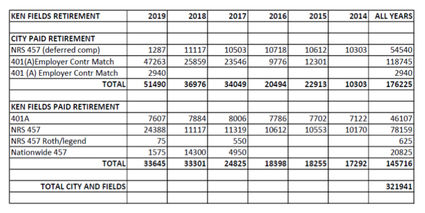 Since 2014 the city has contributed a little over $176,000 toward Fields' retirement. He currently is proposing that they allow him to buy extra years of service to make him eligible for a general pension estimated at $45,000 per year for life. Without a service buy-in Fields will be two years short of the required 10 years for a general pension when his contract expires in 2022.

EDITOR'S NOTE: In reviewing pension costs for a story about the city manager wanting to buy into the city's general pension plan without completing the required minimum 10 years, LakeWalesNews.net was surprised to find such a large increase in 2019 to his 401(A) retirement plan. We subsequently watched the video of the Feb. 5, 2019 commission meeting and reviewed the agenda memo written by Fields. We notified the mayor and commissioners of the discrepancy, which prompted the concerned responses of two commissioners. Fields' evaluation and any contract changes will be on the Feb. 18 commission agenda.

The $3650 figure in the agenda memo from last February is the net cost to the City of the change in retirement contribution less the amount that I did not receive in either cost of living or merit pay adjustment in my salary last year. I made the commitment at the time to not seek any pay adjustment this year also.

There is a discrepancy in the 2019 year to date totals for my salary and benefits. When the calculations were done for the balance of 2019 after my contract was approved, it was assumed that there would be 23 pay periods remaining in the calendar year. However, the payroll for Thursday, January 2, 2020 was processed on Tueday, December 31, 2019 since the normal processing day of Wednesday was a holiday, New Year’s Day. The result is the 2019 Year to Date Total in one pay period higher than expected. The total for 2020 may have to be adjusted accordingly and any tax liability for 2019 will be my responsibility.