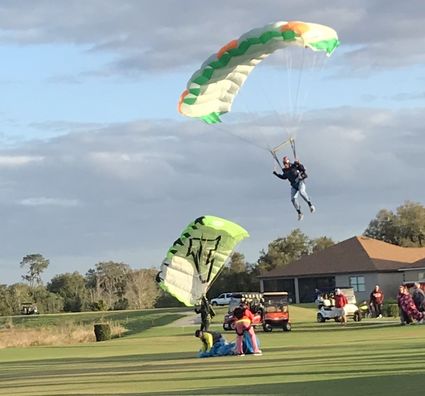 She only jumped once herself but brought thousands of skydivers to Lake Wales and introduced countless others to the sport.

At the age of 18 Hill opened her first skydiving business in Downsville, MD with her first husband, George Kabeller. The couple in 1984 moved to Florida, where they built the Zephyrhills Parachute Center. Eleven years later they purchased the Florida Skydiving Center in Lake Wales, which Hill continued running on her own after an amicable divorce two years later.

In 2002, she married Roger Hill, who supported her business endeavors and extensive community service. Hill watched intently on Saturday as one-by-one skydivers maneuvered through strong winds to set down lightly on the golf course. At one point a group of nine skydivers paid tribute to Hill as the "missing woman," with eight linking up in formation and one off to the side. Particularly impressive was a skydiver hanging from a Canadian flag-emblazoned canopy while dragging a huge American flag. The sounds of Lee Greenwood's "God Bless the U.S.A." played in the background.

Roger Hill thanked the skydivers and attendees, who enjoyed an abundant spread of food and looking over tables full of photographs of skydivers and various stages of Hill's life.

In addition to owning the skydiving center Hill served as the airport's fixed base operator. She was active in the Kiwanis Club of Lake Wales and was a past president of the Lake Wales Area Chamber of Commerce.