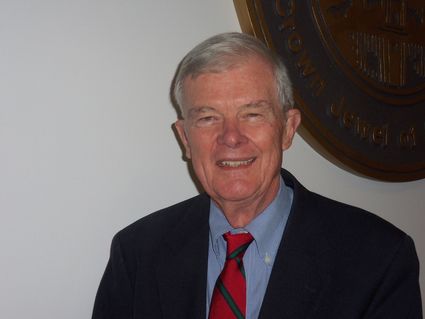 In addition to his wife Jean, Robin Gibson has two major loves – the Lake Wales Charter Schools system he helped create and historic downtown, which he is committed to help redevelop.

It was a tough choice, but Deputy Mayor Gibson announced at the March 3 city commission meeting he will give up his job as general counsel for the charter schools to avoid an ethical conflict. His resignation takes effect March 15.

Gibson said the potential sale of the city's 1919 school property to the charter school system as a location for Bok Academy North makes the likely transfer a business transaction. The Florida Ethics Commission in a 2017 opinion made it clear Gibson could only represent one of the two parties doing business. He chose to remain on the city commission, and he's running for re-election April 7.

Gibson said he felt he could represent the best interests of both the city and the charter school system, but the Ethics Commission gave him no choice. He said he chose to stay with the city because of his strong commitment to seeing through the redevelopment of the city's historic downtown.

Gibson sought the ethics opinion in 2017 when the charter system approached the city asking for a donation of the school property, located north of Seminole Avenue between Third and Fourth streets. Donation wasn't an option at that time because the city could only dispose of the property through a competitive bidding process. To avoid any ethical conflict at that time Mayor Eugene Fultz resigned his position on the charter schools board of trustees.

Subsequently the city transferred the property to its Community Redevelopment Agency (CRA), which has more flexibility. But instead of renewing its request for a donation the charter system is negotiating for purchase of the property, which includes not only the 1919 school building, but also the old cafeteria and the former elementary, which now houses the Boys and Girls Club.

When charter school officials last month approached the commission, serving as the CRA, Gibson excused himself from the room to avoid any conflict. As deputy mayor, Gibson chairs the CRA.

Since 2002 Gibson has been the driving force behind the local charter schools initiative. Four local elementary schools and the high school converted to charter status and became part of the charter system in 2004. The charter system has since added two middle schools, Bok Academy and its sister school, Bok Academy North, which opened two years ago in local churches and is now seeking a permanent home.