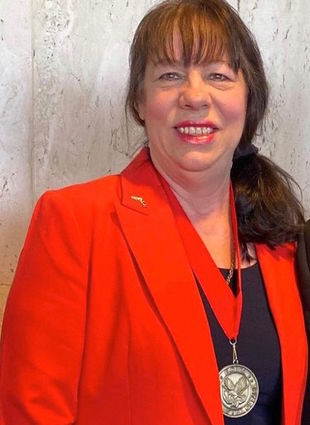 Kathryn "Kat" Gates-Skipper from Lake Wales, along with 16 fellow Floridians, was inducted Monday, March 9 into The Florida Veterans' Hall of Fame at the Capitol Building in Tallahassee.

The Florida Veterans' Foundation joined with the Florida Department of Veterans Affairs to recognize these Military Veterans that have made a significant contribution to the State of Florida.

The Medal Ceremony began at 10:30 a.m. in the Cabinet Meeting room. The medal was presented by CFO Jimmy Patronis. FDVA Executive Director Danny Burgess congratulated inductees on behalf of the Florida Department of Veterans' Affairs for their selfless service and sacrifice.

After the Medal Ceremony, inductees, guests and family moved to the Plaza Level of the Capitol. After a countdown, the attendees were treated to the unveiling of the Class of 2019 names that were added to the plaque hanging on the Veterans' Hall of Fame Wall.

Gates-Skippert also received a personal letter of appreciation signed by U.S. Sen. Rick Scott.She was accompanied by her Army usband, Charles Skipper, and she had several friends and state Representatives in the audience, as well.

When asked what being in the Florida Veterans Hall of Fame meant to her, she said: "My Husband is my soulmate, my rock, and the reason I do what I do. This medal and induction into the Florida Veterans' Hall of Fame, is the icing on the cake and means a lot to me in so many ways. Recognition from my peers is humbling. I'm just a veteran trying to help other veterans. Most importantly, it's a legacy I leave behind for my children and grandchildren. I hope that I have taught them it isn't as much the material things that matter in life but rather, the love and respect, what you do for people and your country, that matter most of all."