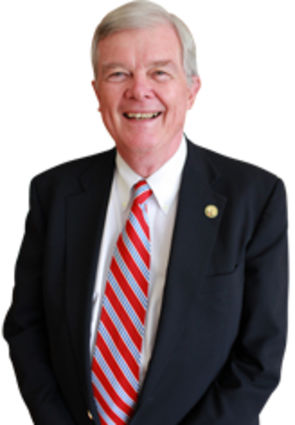 Gibson took 63 percent of the vote against challenger Bob Wood.

The 2019 city election drew a little over 1,800 voters. The COVID-19 virus scare made campaigning difficult and apparently kept some people away from the polls; only 219 voted at the polls Tuesday, compared with 538 in 2019.

"I was very gratified with the margin and I have to think that a lot of that was attributable not as much to me but I wanted this to be a referendum on the Dover Kohl plan for the renovation of the city's historic core," Gibson said, noting he is looking forward to connecting downtown with the northwest section.

In addition to supporting the downtown redevelopment Gibson said in his role as chairman of the Community Redevelopment Agency he plans to advocate for the city's 1919 school property off Seminole Avenue becoming the site for Bok Academy North. Gibson recently resigned as general counsel of the Lake Wales Charter Schools to avoid any conflict of interest in supporting the property sale.

"When you see a historic building that has become derelict and there's an opportunity to put it back in service for its original purpose you just don't want to lose the opportunity," Gibson said. "It's the best thing for the community and the economy."

Despite losing in his third attempt at running for a city office Wood said he plans to stay involved and continue raising issues, especially about the city's pension plan. And he isn't ruling out running for office again: "We got beat and that's the way it is, but when you're 50 years old you don't rule out anything." Gibson acknowledged that Wood raised "a couple of points that I think resonated with people. I'm going to pursue those and talk to him about them."

Gibson said in addition to making sure the city pension plans are solid he wants to look at how employee salaries are set.

"We got issues out, that was the most important thing. These issues have to be addressed now. If Robin can address them now they won't be as big of an issue," Wood said.