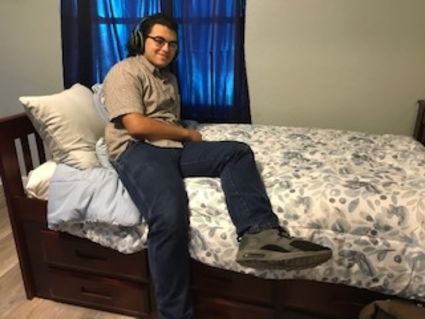 Music education major Raymond moved out of his car and into Scholarship House.

Since September Raymond had been living in his car. The music education major at Polk State College said he had two blankets for cold nights, but if he didn't remember to tape his car's door gaps on rainy nights the water poured in and woke him.

Raymond stayed committed to his studies despite spending most nights in a WalMart parking lot. Two weeks ago he left the ranks of the homeless and moved into the new Lenfestey Scholarship House at the Manse on Avenue Q in Winter Haven.

The Scholarship House, formerly the parsonage at Living Word of Faith Assembly, is a project of Heart 4 Winter Haven and Polk County Rotary Clubs. Since September more than 75 volunteers and about two dozen businesses have donated time, money and labor, valued at more than $65,000, to get the house open. The church is leasing the house to Heart 4 Winter Haven for $1 per year, and assistant pastor James Arnold has stayed very involved as a project volunteer.

"We were fortunate to get the house in enough shape to take in our first few men before the most recent round of restrictions," said Heart 4 Winter Haven Executive Director Brad Beatty. "I am so proud of how this community came together to make this happen. I cannot thank everyone enough."

Two of the three student bedrooms are ready to house up to six young men. In addition to Raymond, house manager Dexter Thomas and Polk State student Sean, a chemistry and philosophy major, were able to move in the second week in April. The third bedroom, which will house two students, and the second bathroom still need finish work and two outside doors need replacing, but getting the young men into a safe and welcoming environment was the top priority.

Due to family circumstances Sean dropped out of high school, but at age 22 he was given a second chance and completed his regular diploma at New Beginnings High School in Winter Haven. Since then he has completed his associate's degree at Polk and is taking some additional classes as he applies to colleges and universities to complete his bachelor's degree. His dream is to attend an Ivy League college or university.

Sean was volunteering at The Mission in Winter Haven when he met Beatty. Sean was losing his temporary housing and wanted to serve as a mentor and tutor for other college students, so Beatty felt he was a good fit for the new Scholarship House.

Beatty said Heart 4 Winter Haven is now taking referrals for new admissions. When the project began Polk State estimated at least 15 of its students were homeless or didn't have a stable housing situation.

"We will take it slow due to the current pandemic, but we are committed to ending homelessness among our local college students," said Beatty, noting he also would like to develop a scholarship house for young women students sometime in the future.

Rotary on the Ridge President Herbert Gillis said he wanted to connect Rotary Clubs from throughout Polk County for a group service project and the Scholarship House was the perfect opportunity. The first work day was scheduled on Sept. 28 to begin the renovation project, which involved stripping the house bare, scraping windows, painting and landscaping.

It truly became a community project and as each new challenge arose people stepped forward to meet the needs.

A community comes together to fight student homelessness.

The Scholarship House is being named in honor of the late Fred Lenfestey, the first president of Polk Community College (now Polk State). When it was used as a parsonage it was called The Manse, so the official name will be Lenfestey Scholarship House at The Manse. Once COVID-19 restrictions are lifted a ribbon cutting and open house to recognize donors will be scheduled.

Additional funds and volunteers are needed to complete the project. Tax-deductible donations can be made online at https://www.heart4wh.org/donate