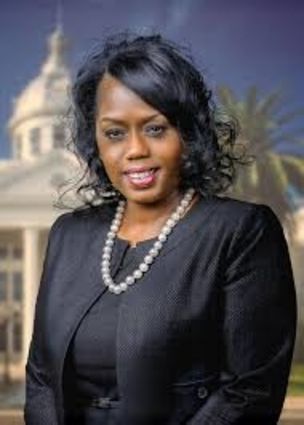 As a little girl growing up in Lake Wales Cassandra Denmark set her sights on first becoming an attorney and then a judge. That determination resulted in her current successful law practice in Bartow, and 18 years' experience that prepared her for her new role as a circuit judge in January.

Denmark was elected without opposition Friday, April 24 when she was the only person to qualify to fill the vacancy created by the retirement of Circuit Judge John Radabaugh. Circuit judge vacancies normally draw multiple candidates, so Denmark was pleasantly surprised she could suspend her campaign early when no one else filed to run.

Prior to going into private practice Denmark served as director of legal affairs for the Polk County Sheriff's Office for five and a half years. Denmark earned a bachelor of arts in criminology from the University of South Florida and her juris doctor law degree from the Thomas M. Cooley Law School in Lansing, MI.

Incumbent County court judges Hope Pattey, Lori Winstead and David Stamey Jr. were re-elected without opposition. All three had been appointed to fill vacancies when other judges retired or nominated for circuit court positions.