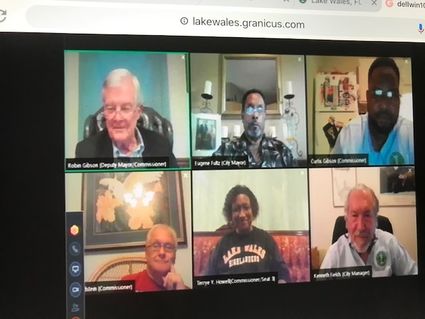 Lake Wales City Commissioner Al Goldstein wants a return to in-person commission meetings sooner rather than later. He says while technology is improving he laments the loss of citizen participation since the commission started online meetings.

Goldstein said through a Florida League of Cities conference call he found out some other cities, including Auburndale, have restarted in-person public meetings, but with precautions.

"I feel Lake Wales can also take the lead on this very safely," Goldstein said. "I think it's time to go back to doing city business in public."

He suggested moving commission meetings to a larger venue, possibly the James P. Austin Community Center, so commissioners, staff and the public can spread out to comply with recommended social distancing of at least six feet.

Vice Mayor Robin Gibson said he would be comfortable with public meetings as long as the city follows Center for Disease Control guidelines. But Gibson said he would prefer meeting in the commission chambers at the city administration building, which has the technology in place to live stream meetings. He said he would seat commissioners six feet apart on the dais, the raised platform at the front of the room, and place staff six feet apart in front of the commission. On a first-come basis citizens could be admitted to the commission chamber to fill designated seats spread to achieve social distancing. Any overflow would have access to the meeting through the current live stream on the city website.

City Commissioner Curtis Gibson said he also misses the public participation and would be fine with re-starting public meetings with precautions: "I'm not opposed to it as long as we're not putting anybody in jeopardy."

But Commissioner Terrye Howell said wants to stick to the online format for now: "We haven't been tested, so no one knows who has it or not. Some of these people who might come to the meetings might be carriers and we won't know it because no one has been tested."

Mayor Eugene Fultz said local testing is ramping up but he would rather "err on the side of caution by waiting" until the end of May to restart public meetings: "Right now I'm really not comfortable doing it. Most of us are old men and we are more susceptible to getting the virus."

Goldstein said he believes the lack of public participation is a serious problem: "We're hurting everybody. A lot of our citizens are from the northwest section and we're blocking them out. If that's intentional I don't like that."

Howell, who represents much of the city's predominately African-American northwest section, said people not having the opportunity to speak up at public meetings is a concern, but she is more disturbed that city leaders seem to be ignoring citizen complaints.

"Nothing is being done. We talk about the same things over and over again about the northwest section and its problems, how people are being treated and nothing has come of it, nothing has changed," Howell said. "Unless we change our leadership's handling of it, why let them come in and spout off and nothing is going to happen."

The next city commission meeting is at 6 p.m. Tuesday, May 7, when Robin Gibson and Howell will be sworn in for new 3-year terms. The agenda and backup material are posted online at http://www.lakewalesfl.gov generally the Friday before the meeting. After some problems with initial online meetings, the City switched to using Go to Webinar software, which allows for a live interactive meeting space between citizens and city officials. Those wishing to participate online can register at https://register.gotowebinar.com/register/6719831745716676364 The city still offers the option for people to submit comments or questions through an email link http://www.lakewalesfl.gov/comments and they are read at the meeting.

Deputy City Manager James Slaton said the city is trying to increase participation by continuing to spread the word about the new technology.

Florida Gov. Ron DeSantis on April 29 announced Phase One loosening of some stay at home restrictions beginning May 4, but the guidelines still discourage public gatherings of more than 10 people. The state is allowing restaurants to re-open with distanced outdoor seating or indoor seating up to 25 percent capacity, with tables separated by at least six feet. Hairdressers, nail salons and other personal care providers are still closed, except for curbside product sales. Retail stores can open with social distancing and 25 percent capacity.