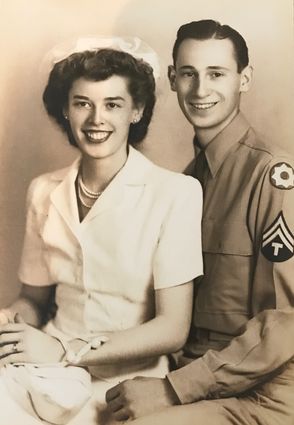 Frances B. Prescott, age 97, passed away peacefully at Palm Garden in Gainesville, FL on April 26, 2020.

Frances was born in Detroit, MI and graduated from Holly High School. In August 1943, Frances traveled by train to Santa Fe, NM and married her high school sweetheart, U.S. Army Cpl. Jesse A. Prescott, who was stationed at Los Alamos. In October 1944, Frances traveled by troop train with her infant son back to Michigan, where she lived with family until Jesse's return from overseas.

In 1953, they moved to Lake Wales, FL where Frances was a librarian at the Lake Wales Public Library for over 30 years. She began her career by reading story books to children. Many may remember Mrs. Prescott for instilling in her young readers a lifelong joy of books. In 2013, Frances moved to Gainesville to be near her children.

She was preceded in death by her husband of 54 years, Jesse Allen Prescott, Jr. and her sister Ruth W. Filkins. She is survived by her son, Capt. Jesse A. Prescott III, USN (ret.) (Kathleen), and her daughter Carrie Prescott Fagan (H.L. 'Buddy'), five grandchildren, and 12 great grandchildren.

A family memorial will be held at a later date.