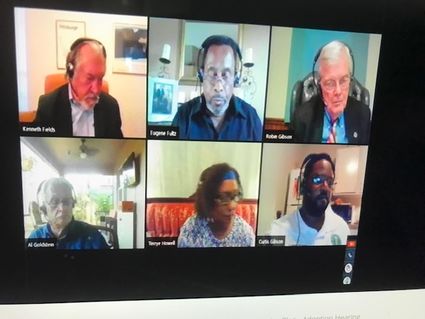 Lake Wales city commissioners are aiming for June 2 to resume having their meetings return to city hall.

But that doesn't necessarily mean that every commissioner and city official will be in the meeting chambers on that date.

City leaders are investigating making that and future gatherings a "hybrid" meeting, meaning persons can choose to attend in person, or continue to attend on-line from a remote location.

All five city commissioners have expressed concern that there has been almost no public participation since the group went exclusively to virtual meetings in very early April, and believe that opening meetings back up to the public at city hall will make it easier to get community feedback.

If people chose to attend the June 2 regularly scheduled meeting of the commission, strict social distancing guidelines will be enforced, reducing the capacity of the meeting chamber to between 20 and 30 total seats, a number which includes commissioners and city staff regularly in attendance.

In addition, the first budget workshop for a 2020-21 spending plan, which was scheduled for Thursday, May 21 at city hall, has been postponed to Wednesday, June 3. Again, that will likely be a "hybrid" meeting, with people present both at city hall, and on-line.

"Usually, this is one of those meetings where we have the greatest amount of public input," City Manager Ken Fields said. "And this is also the meeting we are scheduled to have a discussion regarding body cameras going forward, so that's one of the more high profile meetings we hope to have a lot of input on."

Fields said pushing back the budget session won't seriously impact staff's efforts to have a budget in place by later this summer. The city's fiscal year starts on Oct. 1, and certain target dates must be met along the way.

The first one comes at the end of July, when commissioners must establish a "not to exceed" 'millage rate for the new budget. Commissioners would still have the ability to chose a lower rate, but could not go over the rate they set at the end of that month.

"That's the only hard, early deadline the city has," Fields said. "After that, the next deadlines are the two budget hearings scheduled in September. Moving the workshop doesn't really have a lot of impact on the not to exceed rate deadline. And that still gives us enough time prior to finalize a proposed city budget from department heads."

A Community Redevelopment Agency board meeting scheduled for 5:30 p.m. May 19 has been canceled since there was no immediate action items on the agenda.