The Sign Said: If You Ate Today, Thank a Farmer 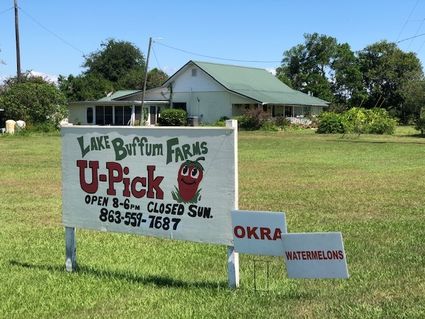 I am so blessed to live in such a wonderful and diverse state. Not only do we get to boast about being the happiest place on earth because Disney World is not too far down the road, but we also are a huge agriculture state - from citrus to cattle to fruits and vegetables. Sometimes I take it for granted how blessed I am to have all this bounty around me.

When my sister asked if I wanted to go pick blueberries three weeks ago, I was so excited. Growing up, I thought blueberries only came in a can in the box of Betty Crocker Blueberry Muffins my mother made every Sunday morning before church. Thanks to amazing institutions like the University of Florida, blueberry varieties can now tolerate our climate and we get to enjoy the beautiful blue fruit this time of year.

We went back this week and picked another bucket each since they are quickly going out of season. The farmers must cut the bushes back – even though they are still bursting with those beautiful little brain berries – because they need to get ready for next season's crop. My freezer is now full, and my smoothies will be yummy for months to come.

Today my sister asked me if I would like to go pick tomatoes. That was a really easy "yes." So out to Lake Buffum Farm we went. A short drive down U.S. 27 south to Alturas Babson Park Cut off Road - or ABC Road for short. Go left at the fork in the road and head toward Fort Meade. The farm is on the right side of the road.

I spoke with Ron and Caroline Young, who own the working farm. They have been married for 55 years and met on the school bus. Ron said Caroline was the bus monitor and would always get him in trouble. He said she caused him to get many whippings. Caroline disagreed and said she never caused him to get a whipping . . . he did not deserve.

Caroline grew up on the farm and has lived in the same house her entire life. The farm is open for visitors every day from 8 a.m. to 6 p.m. except for Sunday. Caroline says they go to see Jesus on Sunday. They offer U-Pick opportunities when they can. Today was tomato day for us.

Pro Tip for Picking: Go Long. Carry the bucket to the far side of the crop you are picking because it is light. As you fill the bucket it gets heavier. Once your bucket is full, you are closer to the vehicle.

Right now, they offer tomatoes, peppers, zucchini and yellow squash, okra, black eyed peas, conk peas, watermelon, onions, green peppers and corn is coming on (which means it's not quite ready yet). They also offer several homemade goodies like jellies and pickled okra.

Watching the ladies shell the black-eyed peas through a machine, I could not help but think that was cheating. I remember as a young child our mother bringing home bushels of peas. You see, our mother, Helen, used to can and put up food. Most often, she would load us up in our Mercury station wagon with the wood paneling on the sides and take us to pick peas, or corn, or tomatoes or strawberries or what ever was in season.

Sometimes, she would buy peas by the bushel and bring them home in laundry baskets. She would put newspaper down, pour the peas out on to the paper, turn the fans on the mountain of peas and our work would begin. The kids were given a bowl or enamel pan of peas in the pod and we would have to shell the peas until they were all done. Once that happened, mom would wash the peas in our double sink, then can them on the stove in Mason Jars. She had big heavy canning pots on our stove. 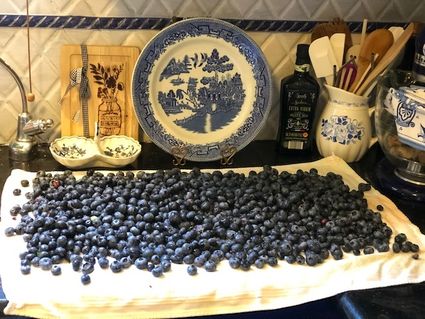 Much later in life, after our mother had passed away, her best friend in the entire world told me a story. When they moved into the neighborhood on Steedly Avenue in Lake Wales, her husband was out of the military and started working for the power company. She was a church secretary and they had two children. She said my mother would walk over every so often and give her food she had canned or put up. Our mother never knew that many times the food she brought to share was the only food they had to eat.

I was so happy to be able to share my bounty with my neighbors as well.

So I would suggest heading down highway 27 south, turning west on ABC Road, stay left at the curve and stop at Lake Buffum Farm. Thank the farmers and buy a little more than you need so you can share it with your neighbors.