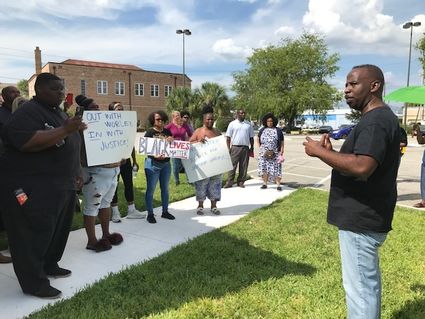 About 125 peaceful protesters gathered Sunday afternoon at the Lake Wales Police Department, but unlike groups around the country their issue was not the killing of a black man by a white Minneapolis police officer. Instead, they were calling for racial justice at the local level and demanding the firing of a Lake Wales police detective, who ironically was named 2019 Officer of the Year.

The Poor and Minority Justice Association, a Winter Haven-based civil rights group, issued the call and passed out signs calling for the ouster of Detective Travis Worley, a five-year department veteran who now serves in the department's Crime Suppression Unit, focusing his efforts on drug investigations and repeat offenders. The PMJA is targeting Worley for alleged racial profiling, using racial slurs, excessive force, harassing and intimidating members of the black community.

PMJA leader Clayton Cowart, a Winter Haven pastor, said the organization got involved because Lake Wales officer Whitney Dukes reported that police officials took no action when she reported that Worley had called a suspect a "nigger" while he was arresting him. Cowart said Police Chief Chris Velasquez did not return his phone calls and the issue festered for a full year. Cowart said he was told the allegation could not be investigated because Dukes, a black officer, was away on military duty.

Velasquez and Worley could not be reached for comment. Deputy Chief Troy Schulze said officials are aware of the allegation and there is an active investigation.

"Police Officer Worley needs to be terminated for the use of racial slurs against people here. We're going to stand up and fight for what is right," said Pastor Eli Porter, a PMJA leader who came from Georgia for the protest.

Porter said bad officers are like cockroaches who scramble when the lights are turned on. Several people at the protest said while Worley needed to be fired they were upset that other officers knew of his behavior and didn't object.

The majority of the protestors came from other parts of Polk County and even as far away as Georgia, but the organizers said they expected the Lake Wales contingent to grow as word spreads and additional protests are scheduled every two weeks. Standing in the hot sun they lined up around police headquarters, loudly chanting "We want justice." While most of the signs called for the ouster of Worley, others included such messages as "Black Lives Matter," "Love Never Fails," "But the Greatest of These is Love," "Rise up and Resist," and "We Want Justice."

The PMJA has been involved in complaints against police officers in Lakeland and Bartow making racial slurs and the group filed suit when they were blocked from using restrooms at the Polk County Courthouse during a protest during business hours.

Lake Wales attorney Sara Jones, who has been advocating for more police training, community policing and body cameras, said people are afraid of retribution if they file formal complaints against police officers. She said the Lincoln Community Development Corporation, which she chairs, will work to spread the word about future protests and continue to gather information about officer complaints. She wore a T-shirt that said: "Respect our Existence or Expect our Resistance." 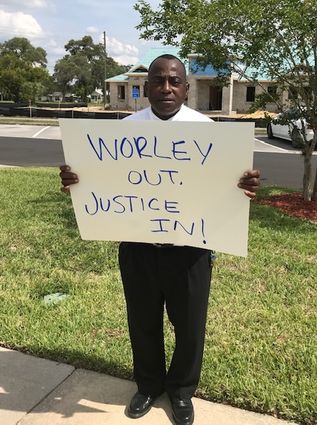 "We're going to need people in the community who will speak up and tell us what's going on," Cowart said.

Cassandra Ulysses held a sign saying "Fire Worley. Justice for Jamar Hasley," her son. She said while she was on the phone with her son she heard him screaming that Worley was beating him. She claimed Worley has gone after all three of her sons and has harassed her, but while she talked to the police chief about her concerns, she didn't file a formal complaint for fear they would arrest her. "Ever since they hire people like Worley our agency has gone down," she said.

Cowart said Sunday's protest against Worley will likely be the first of many: "We will stay here until he is gone."

NOTE: A gallery of protest photos can be viewed at https://www.lakewalesnews.net/photos

A Tale of Two Worleys

Charles Dickens wrote about the best of times and the worst of times. No doubt Lake Wales Police Detective Travis Worley can relate, since just five months after being named 2019 Officer of the Year Worley was specifically targeted by protesters accusing him of racial profiling, excessive force and a host of other offenses.

The 41-year-old Worley joined the Lake Wales Police Department in February 2015 after graduating from the Police Academy at South Florida State College. After three years’ service he was promoted to Patrolman 2, and he now serves as a detective in the department’s Crime Suppression Unit, focusing his efforts on drug investigations and repeat offenders. He is paid $20.21 an hour, or a little over $30 per hour for overtime work.

Worley graduated high school from Landmark Christian School in Haines City in 1997, and before becoming a police officer worked as assistant manager of an auto parts store and as a fiber optics technician for Verizon. He is the father of two sons and has coached little league baseball and middle school football.

Worley has received above average evaluations the last two years and has 10 letters of commendation in his personnel file, recognizing such things as support for other officers, positive interactions with the public and fast crime solving. In documentation for a Distinguished Performance Award, Deputy Chief Troy Schulze cited Worley’s “Can-Do” attitude, commitment to the job and his “speaking to criminals and turning them into productive confidential informants.”

The December 2019 Officer of the Year Award narrative signed by Police Chief Chris Velasquez said between September 2018 and September 2019 Worley made 49 arrests, “many of which are serious felonies. A majority of the defendants in these cases are subjects responsible for committing other serious crimes in our community such as theft, burglary and violent assault. Because of his efforts, many of these subjects now face mandatory prison sentences at both the state and federal level, thus protecting innocent people from being future victims.”

In recent months, rumblings about Worley have been growing, including allegations of racial slurs, intimidation, excessive force, theft of money from suspects, planting of drugs, harassment and more. But those making the claims have not followed up with formal complaints.

Velasquez says Worley is a good officer and unless people provide specific details he has nothing to investigate. The five complaints released by police, none specifically alleging racism, were determined by police to be unfounded. They included allegations of theft of $1,200 from a suspect’s truck, enlisting a confidential informant to make false accusations, rude and aggressive treatment including repeated use of profanity during a traffic stop, and false arrest resulting in injury. A fifth complaint was from a woman who was being arrested on an outstanding warrant for grand theft and possession of methamphetamine. Bitten by a police dog and charged with resisting arrest, the woman listed her complaints against Worley and Dale Hampton, the canine’s handling officer, as 1) breach of public trust, 2) police misconduct, 3) unethical behavior/conduct, 4) conduct unbecoming, 5) physical abuse, 6) personal injury, 7) violation of policy/procedure, and 8) perjury.

The only disciplinary action in Worley’s personnel file was a warning when it was determined he didn’t follow procedure regarding checkout of a marked police vehicle and didn’t inspect the back seat, where illegal narcotics were later found.

Velasquez said citizens with complaints can contact any officer, who will direct them through the process: “They just have to reach out to us and we’ll do our job. We’ve done it historically and we’ll continue to do it. We’re never going to stop.

“We’re always going to do what’s right whether it’s popular or not, with our folks or the pubic. It’s the job we have to do and we take it seriously,” Velasquez said.

Lake Wales attorney Sara Jones has at least one client with a beef against Worley and she’s been documenting complaints from others, including at least 10 filed with police officials. She says citizens, especially those with criminal records or who are on probation, are afraid to come forward because Worley “harasses people. He terrorizes the Northwest section,” which is predominantly black.

During a Jan. 30 workshop Jones requested to discuss the possible implementation of body cameras, more community policing and additional training, commissioners expressed concerns about the current complaint process, suggesting a simpler, online form should be considered.

The current Lake Wales Police Department Citizen Complaint Procedure requires written, notarized statements and a possible polygraph examination, and it cautions “If a complaint obviously has no merit and is intended solely to cause anxiety for the officer, civil proceedings may be filed against you.” But it then concludes: “This is not intended to discourage anyone from filing a legitimate complaint.”