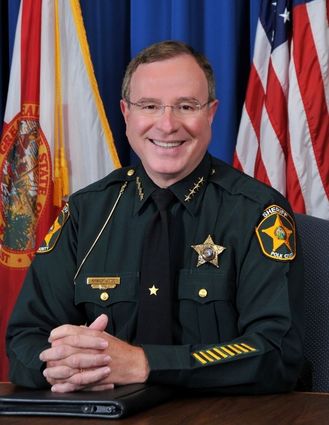 Editor's Note: This message is being reprinted from the sheriff's Cyberstar Community Update:

As all of you probably know by now, a man by the name of George Floyd died in police custody in Minneapolis, Minnesota on May 25. Clearly and unequivocally, the death of George Floyd at the hands of those officers was outrageous and we need to hold them accountable for his death. Though it took too long in my opinion, all four have now been charged. Since Mr. Floyd's murder, a wide variety of people and groups have protested his death nationwide.

Some of these protests - too many of them - have become violent. Most protesters have been non-violent, but some have taken advantage of the protests and caused destruction of property, theft, death, and injury. There is no excuse-legally or morally-for this kind of violence.

In Polk County, I am happy to say, it has been different. My heart is full with gratitude for our community. Last Sunday there was a peaceful protest in Munn Park in Lakeland. People had a chance to express themselves and mourn the death of Mr. Floyd. It lasted a few hours and was peaceful. Later that night, though, a group of protesters numbering somewhere between 100 and 200 people congregated at the intersection of Florida Avenue and Memorial Boulevard, entered the intersection and shut down traffic. When the Lakeland Police Department asked them to leave multiple times, they did not leave. When police officers moved to clear the intersection, rocks, bottles, and bricks were thrown at them. LPD asked us to assist them with crowd control and we did.

We and LPD later successfully cleared the intersection, and dispersed agitators out of the Lakeland area. Again, violent protesters threw rocks, bottles and bricks. By midnight, we had cleared the area and the incident was over. No officers or deputies were injured (thankfully because of our protective gear). Only one local business was damaged (not looted) and a few police vehicles and private vehicles were damaged. Overall, because of our decisive action, and the cooperation of peaceful citizens, we avoided the mayhem and severe damage we have seen elsewhere.

On Monday, Lakeland Police Chief Ruben Garcia and I, along with Reverend Arthur Johnson and community leader Don Brown, spoke to the media about our community-wide commitment to peaceful assembly in Polk County.

During the news conference I reminded everyone: "Let there be no misunderstanding, at all, that if you come here to riot, to loot, to injure people, we're going to lock you up in the county jail before quick."

I also said: "The message is clear, if you come here to peaceably assemble and protest, were're gonna make sure we protect your constitutional right to do that and we encourage it. But for those who want to come in, stealthily, among those wonderful people who are simply making their position known, the ones that tried to infiltrate, we are going to hunt you down and lock you up if you engage in any criminal conduct."

My thanks go out to those who were involved in the peaceful protests in Polk County. This is a great, safe, peace-loving community. I am also thankful for our outstanding Lakeland Police Department and other law enforcement partners for their professional work, and our own men and women who were out in force Sunday, Monday, and Tuesday night, keeping our community safe. As always, if you need us we are here.