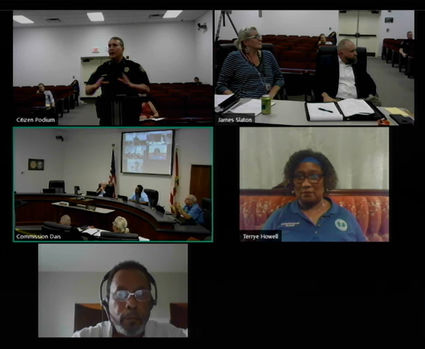 Body worn cameras for Lake Wales police officers got put on the back burner during a budget workshop June 3, but not without heated discussion and passionate disagreements among city commissioners.

Commissioners Terrye Howell and Curtis Gibson advocated for body cameras to be a budget priority, but Mayor Eugene Fultz, who previously supported them, cited budget concerns and his doubts that cameras would resolve issues between police and citizens.

Deputy Mayor Robin Gibson opposed body cameras, calling them symbols of distrust: "I would rather tackle the trust issues. If we have to go to body cameras as far as I'm concerned that's an admission of defeat; we have been unable to achieve the relationship of trust with our citizens."

Commissioner Al Goldstein, who less than a week before the budget workshop said he would support the purchase of body cameras, said Wednesday he had done his own research, including talking to police officers he knew in other states. He claimed the American Civil Liberties Union and some NAACP organizations oppose body cameras, which might document things people don't want them to see: "We've all fought for civil rights for many years. You want to give up some of those rights because of a lousy camera? I don't think so."

The national NAACP actually adopted a resolution in 2015 supporting not only police body worn cameras, but also dashboard, weapon and taser cameras, with proper training and policy safeguards in place, saying they can "lead to significant improvements in police accountability and trust among a community." The Lake Wales NAACP Chapter is expected to take a position in the near future.

Howell said the community was asking for body cameras because of mistreatment by police officers, and past complaints "fell on deaf ears." She said a few "bad apples" spoiled things for the other officers.

"If we had leadership to make these officers do the right things, not being petty, not being nasty, not being taught how to act, then I wouldn't care about a body cam because it would not be needed in Lake Wales, but that has not happened," said Howell, noting funding could be found if body cameras were a priority. "In the Northwest section people are sick and tired of being sick and tired of being mistreated. I don't mean criminals. I don't mean people who are selling drugs or being abusive. I'm talk about just ordinary citizens being mistreated by the police department, and the Lake Wales City Commission and by the administrative departments."

Commissioner Curtis Gibson challenged his colleagues to walk the streets in the Northwest area and to keep an open mind about body cameras. Commissioners didn't ask what they would cost, but interim City Manager James Slaton came prepared with revised figures that indicated year one would require about $75,000 to cover equipment purchase, software and storage, with the cost dropping to less than $50,000 annually in subsequent years. Those figures were significantly lower than estimates thrown out by recently retired City Manager Ken Fields, who tried to discourage implementation of a body camera initiative, citing budget concerns.

"The fact of the matter is the people of Lake Wales and the Northwest district are saying they feel like they are getting mistreated. There's some mistrust. I don't look at it as a defeat because we want to explore options and say 'Hey, let's talk about body cams,'" said Curtis Gibson, noting cameras promote transparency and can build trust: "It can help both parties. It can protect officers and also help the citizens."

Goldstein proposed re-establishing a citizen police advisory committee to hear community complaints, but said "I don't want it as a bitch committee." He said he hoped people would bring their concerns to commissioners, who would forward them to the police department for investigation.

Howell, who has represented the predominantly black Northwest section since 2005, was visibly angry and frustrated over bringing forth many of the same complaints year-after-year with no resolution.

"Shame on us and all of you who are not being affected by it that you do not see the need to make it happen or get somebody else to make it happen because it's not happening in the right way. I don't think I would sit here when something is happening in your part of the city and do nothing . . . that would sicken me," Howell said.

Goldstein angrily responded, saying he had been advocating for the Northwest community and had walked the neighborhoods, listening to people's concerns.

Fultz said he distributes food and has close connections in the Northwest section and sympathizes with those who feel mistreated.

"I grew up as a black man in America. I know the racial tension. My heart is with the people that are being mistreated there. When we start talking about mistreatment I know there was one officer that was brought forth as the reason the demonstration took place last Sunday," said Fultz, referring to Detective Travis Worley, who was suspended with pay two days after the budget workshop pending an internal investigation. "If it's one officer, why isn't it that we can find a way to resolve any issue that we have with an officer or two or three, if that's the case, without doing the body cam thing.

"This is one of the most distrusting things the city could possibly do, say body cams solve or resolve issues."

Attorney Sara Jones first proposed purchase of police body cameras and called for more community policing and additional training, especially regarding implicit bias and how to deal with communities of color: "I am the one who requested the body cams but I think judging from the whole discussion that just happened my point is well taken that we have a problem. I don't think the body cams will be the complete solution to the problem."

Jones said Worley and one other officer have generated the most criticism. "You cannot say that dozens of people have come to me with similar issues and that everyone is telling the same lies. My case will prove officer Worley, he lies on people. For you to blanketly say 'I just don't believe it' is part of the problem."

Police Chief Chris Velasquez asked commissioners to "have faith in us and let us do our jobs. We're as hard as you can ever imagine on our people. We don't tolerate nonsense. Even to hear people say we act like we do, no matter what you say, it's not right."

Velasquez said complaints were investigated and determined to be unfounded. But then he became emotional and added fuel to the fire by criticizing Jones for re-posting on her personal Facebook page information on what to do if a person got into a situation that involved tear gas and implying she possibly shouldn't be considered a community leader.

Fultz called for Jones, Velasquez and Slaton to sit down, possibly with a mediator, to start communicating about the issues: "We do see that there is a problem and resolution needs to come to those problems. At some point the city has to take responsibility because if the city doesn't believe we have a problem, the city will never come up with a solution."

Slaton, in only his second day as interim city manager, said he had recognized the problem for some months and had been talking to Velasquez about addressing them: "We're going to talk about these issues. We're going to figure out some way to bring people together and to care about each other," Slaton said. On Slaton's third day in the position, Detective Worley was suspended with pay pending the outcome of an active internal investigation.

If the Northwest community has a dinner fied body cameras as a way to begin to rebuild trust with the police department it behooves us as a community to provide those cameras. It is a first step, not a complete solution. And yes I realize that it is expensive. But in Lake Wales we need all of our citizens to thrive and be successful so that we all might prosper. And at the end of the day we have to ask ourselves what kind of a community do we wanna be? Do we want to be the kind that protects and supports our citizens or do we want to be community that tell citizens your problems are just not bad enough for us to bother with? I would much rather live in a community where we take care of one another and respect one another then one in which we are dismissive of the issues Some of the space. I would hope Lake Wales would be better than that.