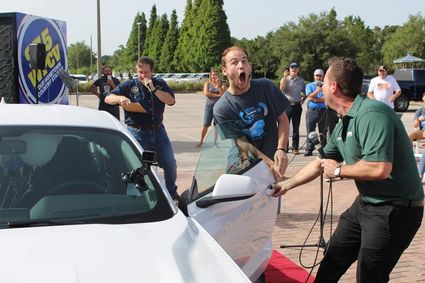 Ryne Pugh, who recently graduated from the Bartow International Baccalaureate program, is obviously excited that his key opened the car door and he won a new Mustang from Bartow Ford

Benny Robles Jr. did something June 27 that he had never done before: He gave away two Mustangs.

Robles, the President of Bartow Ford, decided to do this at the very last minute – the event had already begun. "I have a daughter who just graduated, and I know this has been a really tough year for students everywhere; they have missed out on so much."

"I wanted to do something extra special to make up for at least some of that."

The two Mustangs were given away at the Ford Dealership's 27th annual Drive for Excellence, which had been rescheduled from early May to comply with state of Florida and CDC guidelines.

The Bartow Ford Drive for Excellence program was established in 1993 by Benny Robles Sr. to encourage excellence in education among Polk County high school students. This year, the event again offered local students who achieve As, Bs, and perfect attendance the chance to be drawn as a top qualifier for the opportunity to win a new Ford vehicle.

Twenty students are randomly drawn from the entries, and each student has a chance to pull out the winning key. This year, appropriately, all 20 keys were placed into a clear container that also held hand sanitizer.

It took until the 17th contestant, Ryne Pugh, before the key opened the lock.

Ryne Pugh, who just graduated from IB in Bartow, was that 17th contestant. He plans to attend USF in the fall. When asked about how he felt, he said, "I was shocked, speechless, and very excited."

After Pugh had a moment to regroup, Robles turned to the students and said, "Let's give away another Mustang."

Soon, the remaining 19 students would pull again. This time, when contestant number 4, Marissa Lowry, tried the lock, the door opened. 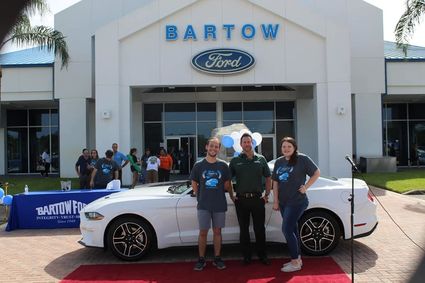 "I wasn't anticipating a win – I'm usually not lucky with raffles or this sort of thing," Lowry, who dropped to her knees when the door opened, said. "I just couldn't believe it."

Lowry will attend Florida Southern College in the fall.