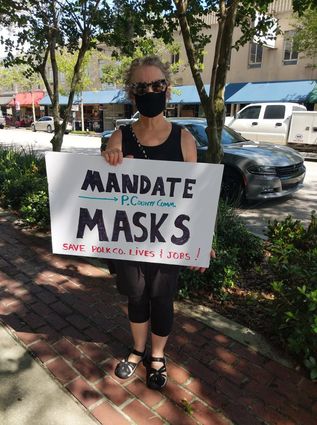 A rally held at the corner of Main Street and Broadway, at the site of the Polk County History Museum, which is the former courthouse, drew only a handful of people July 9. The rally's intent was to persuade people to voluntarily wear masks.

"This is an ad hoc group of people who are concerned Polk County doesn't have a mask mandate," said rally organizer Catherine Price, who added that surrounding counties have made the wearing of masks mandatory. "Our county decided to do a resolution, which really isn't enough." This was, she said, despite the fact that Dr. Joy Jackson, director of the Florida Department of Health in Polk/Hardee counties, gave what Price termed a sobering report to the BOCC.

Among those present was Bob Doyel, who is running against current BOCC chairman Bill Braswell. Doyel, a retired judge, felt that Braswell is more concerned with re-opening the economy, rather than concerned over the health and well-being of Polk County's residents. 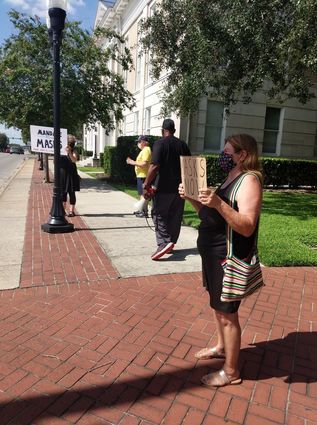 "They didn't donate any money for the people of Polk County until the numbers went through the roof," Doyel said.

As Price and the few people who came out in support of the rally held their handmade signs, motorists who agreed honked their car horns in acknowledgement.

The rally, said Price, was to last for an hour, having started at 4:30 p.m., Thursday, July 9, despite the oppressive heat, the temperature being 93 degrees Fahrenheit yet feeling 103 degrees Fahrenheit. Because of that, the decision was made to hold it at the junction of Main Street and Broadway Avenue, rather than at the BOCC building, because trees lining East Main Street in front of the museum offered shade.