Police Setting Up "Rallying Points" for Informal Chats with Citizens 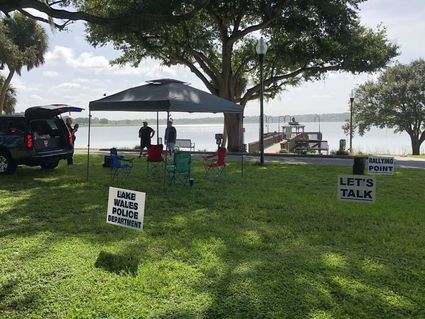 The Lake Wales Police Department kicked off its new "rallying point" program Thursday, July 9 – setting up a canopy tent and chairs by the lake and inviting people to stop by for a chat.

"We've got no agenda We want to talk about what the community wants to talk about," said Deputy Police Chief Troy Schulze. "It's an informal way to do community outreach, without the formality."

Schulze said he and his wife, Kami, came up with the idea while walking around the lake and then he discussed it with police chaplains J.J. Pierce and Walter Nelson, two local pastors.

They chose Lake Wailes Park for a soft opening of the first rallying point site because the area attracts a lot of people from various cultures.

"We just wanted to get a feel for it," Schulze said. "We decided to give it a shot. The rallying point, going with that term, it's just people joining together for a common cause."

Schulze said he and Chief Chris Velasquez were joined by a handful of other officers in uniform Thursday and about a dozen people stopped by. In addition to the tent and chairs they brought an ice chest with bottled water, frisbees and footballs. They set up signs that said "Rallying Point," "Let's Talk," and "Lake Wales Police Department" and talked to people about such issues as traffic stops and world problems. 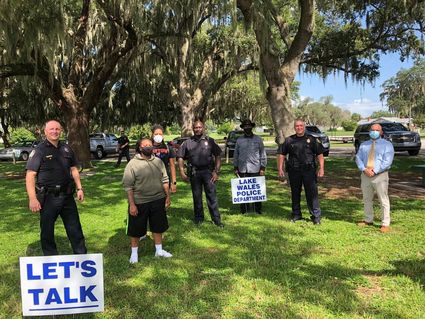 The common theme for future events will be "not in enforcement mode, not in police mode, just being in the community." Schulze said the police will bring information about domestic violence, victims' rights and sexual battery, along with citizen complaint forms. Schulze said the police department plans to set up rallying points in various locations throughout the community, usually for two hours, but they'll stay longer if people show up and want to keep talking. He said they have Spanish speaking officers and community volunteers to help with any language barriers.

"We felt like today was a success. We got good feedback," Schulze said. "We feel good about it. It's low cost with hopefully high effectiveness."

If someone wants to recommend a specific location, an apartment complex or neighborhood, they can reach Schulze at the police department by calling 863-678-4223.