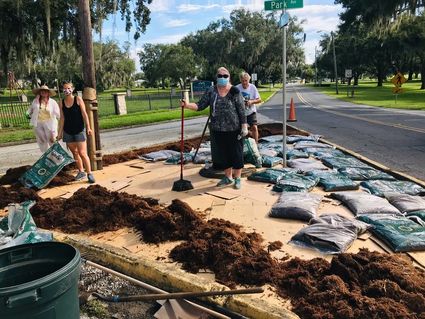 "I'm totally stoked!" said Bonnie Poller, who is chair of the Environment Committee of the Woman's Club, which is spearheading the project. "Neighbors came out to help." More than a dozen volunteers participated. "This was only Phase one," Poller added.

Describing the work as eliminating weeds and preparing the first three, largest triangles, Poller said that three more areas will be prepared in coming days with layers of cardboard and mulch to kill unwanted growth. All will be replaced with flowering native plants later this summer.

"The City employees have been great, (Recreation Coordinator) Stephanie Edwards had crews out there ahead of the volunteers with a loader doing clean-up," Poller said. "(Public Support Services Manager) Beverly Pennington gave us the maximum heights for the new flowers."

Woman's Club President Jessica Bray set up a refreshment tent during the work to keep volunteers hydrated. "We're excited that Bok Tower is working with us to select indigenous low-maintenance plantings that will beautiful the triangles for a long time to come," Bray said. "We're especially pleased that Catherine and David Price joined us" in a demonstration of the commitment that Bok Tower is making to the beautification of Lake Wales. Price is president of Bok Tower Gardens. 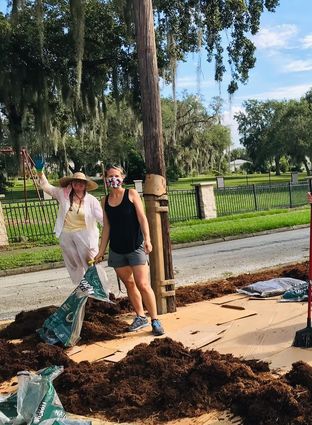 The beautification efforts are expected to blossom through the involvement of multiple civic organizations. Lake Wales Breakfast Rotary recently completed planting 125 Live Oak trees along the Lakeshore Trail and at the city's soccer complex. Two other Lake Wales Rotary Clubs lent their support to that effort.

Continuing the momentum, Lake Wales Heritage is preparing to launch a program of re-planting the original Olmsted streetscaping this fall, an effort which will ultimately involve thousands of trees and flowering shrubs.