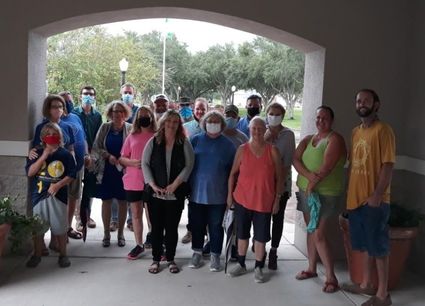 About 30 people stood outside the Lake Wales city administration building praying to God while Sarah Ray of the Atheist Community of Polk County gave the invocation at the city commission meeting Aug. 4. Others filled some of the available seats inside the commission chamber or in the lobby and break room and some people indicated they were praying from home.

City commissioners Al Goldstein and Curtis Gibson exited the room during Ray's comments and returned for the Pledge of Allegiance. Goldstein said invocations by nature are to God or some higher authority, so he considered Ray's remarks "blasphemous." At the end of the meeting, Goldstein read from the book of Isaiah in the Bible he had placed on the dais at the beginning of the meeting.

"We claim Lake Wales for the Lord," said Christian prayer organizer Rebecca Wood, who said she planned to organize gatherings to pray at future meetings.

Calling for "peace and understanding" Ray described herself as a white, transgender woman and a parent who was representing "all your atheist, agnostic, humanist, and other non-religious constituents."

"We are all different in many ways," Ray said. "If we have prejudged each other already upon these differences, I fear we have lost before we ever began.

"Instead, may we seek out that which we have in common, and recognize that much of what makes us different separately, makes us stronger together. This is the foundation upon which we can build a better tomorrow together."

Mayor Eugene Fultz, a Christian minister, claimed to have been "blindsided" by Ray's scheduling, which surprised City Clerk Jennifer Nanek since she had notified him by email July 24. Fultz did not respond to an email requesting clarification of his comments. 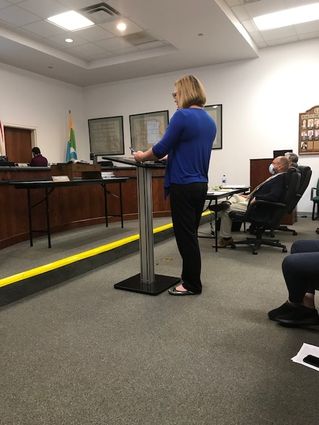 A handful of self-professed atheists, none from Lake Wales, expressed their support for Ray. She said she had been encouraged to speak by someone in Lake Wales who belonged to her group.

Nanek said some time ago she had discussed U.S. Supreme Court rulings about atheists praying at public meetings with City Attorney Chuck Galloway and didn't believe she had an option to deny Ray access.

The city commission at a workshop at 3 p.m. Wednesday, Aug. 12 will discuss options, which could include eliminating the invocation, opening meetings with a moment of silence, inviting guest speakers or or developing a policy that would spell out their use of an official chaplain with guidelines that would not violate the constitution.

Commissioners reminded meeting attendees that they support people's First Amendment rights to address them by offering five minutes to anyone who wants to speak during the meetings communications and petitions portion of the agenda.

really bad take...A handful of self-professed atheists, none from Lake Wales, expressed their support for Ray. She said she had been encouraged to speak by someone in Lake Wales who belonged to her group. Is it really that hard to believe that there may be more non believers in lake wales with a population of 17k? I am an athiest who lives in lake wales, pay taxes here, kids go to school here... and while I do not know of ray nor am i part of their group I support her and I support a lake wales that is inclusive of everyone! The board, and the Mayor should be ashamed! Religion has no part in politics...