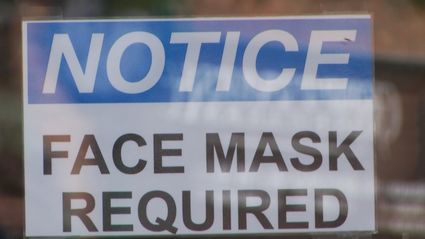 Lake Wales commissioners in a 3-2 split vote Aug. 4 took the first step toward mandating masks in businesses throughout the city. Their ordinance would not take effect until after they vote at a second public hearing Aug. 18.

After not obtaining the supermajority four votes needed to pass an emergency ordinance that would mandate masks for 30 days, Mayor Eugene Fultz, Deputy Mayor Robin Gibson and Commissioner Terrye Howell approved the proposal as a regular ordinance. The regular ordinance would stay in effect until commissioners pass another ordinance repealing it.

Commissioners Al Goldstein and Curtis Gibson expressed strong support for people wearing masks, but opposed a mandate, which they said would unnecessarily put the burden on businesses and local police to enforce.

"The mask is really a false point of security for a lot of people," Goldstein said. "I am not going to put the Lake Wales Police Department in jeopardy when there's a confrontation."

Several people on both sides of the mask debate expressed their opinions, with supporters talking about protecting public health while opponents generally promoted personal responsibility.

Deputy Mayor Gibson talked about his support for personal freedom, but said that right to freedom ended when someone might put another person's health in jeopardy. He said the five commissioners had constitutional authority and "full legislative power" over Lake Wales citizens.

"It's our obligation to protect the health of our people. We can't dodge the responsibility," the deputy mayor said.

The ordinance calls on business operators to post signs and make announcements about the mandate, require their employees wear masks in most cases and ask customers to wear them. As long as they make a reasonable attempt to get compliance business owners won't be cited or fined, according to City Attorney Chuck Galloway. Police will have the authority and discretion to enforce the mandate, giving businesses or individuals who don't comply a warning on first offense and fines of $50 for the second offense and $100 for the third.

Several exemptions are included including those under age eight, people eating or drinking, those with health issues that prevent them from wearing masks.

Dr. Joy Jackson with the Polk County Health Department updated commissioners on the current status of the COVID-19 pandemic, which she said locally had seen decrease in numbers during the last 14 days. She said in the last four and one-half months Polk County had 13,000 people test positive for the virus, 486 of them in Lake Wales, and she said the local hospital currently was treating about six or seven patients diagnosed with COVID-19. While she didn't take a position on the mandate, Jackson did advise wearing as the best way to curb the spread. As of Aug. 4 Polk County, with a population of more than 700,000, had tallied 286 deaths.