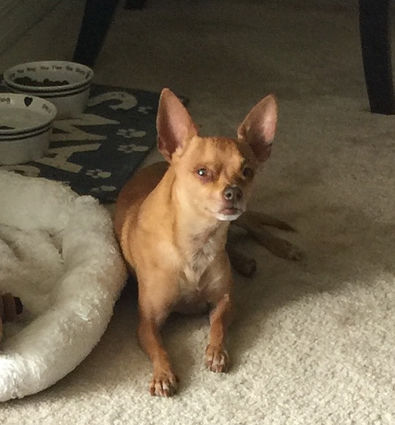 Valdez the chihuahua needs special diet due to kidney disease.

Sandy Dent is very worried about her 9-pound chihuahua that got frightened and ran off during to the July 4 fireworks. Valdez has kidney disease and without special food he could get sick and die.

The fawn colored dog with a little white fur on his neck, chest and toes was lost from the Nature's Edge Community on Orchid Boulevard in Lake Wales. He was first seen standing by the entrance to Jennings Resort where Watkins Road curves into Canal Road near Cherry Pocket. Then Dent said someone told her they saw the dog picked up by two women in a car with a dog. Since they probably thought he was abandoned, Dent said the women might not be looking for an owner.

"If I knew he was happy and they loved him at this point I would not want to rip him away from them but I've got to know that he's happy and he's eating the proper food," said Dent. "I need to know he hasn't been chucked out and eaten by an alligator. I've got to have some closure. It's just killing me." 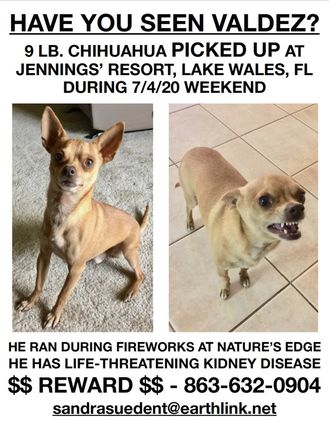 Valdez was a puppy in terrible condition, with no fur and sores all over his skin when Dent found him walking down Canal Road seven years ago: "We didn't think he was going to live. It took him a year to recover."

Dent said around others "he's got a terrible personality," but with her he's a "fun, cute, great dog." She'd like Valdez to come home, but most of all she just wants to know he's OK. While she would like to have him back, she would be willing to let someone else keep him if he's happy, but she would like to visit him and share pictures.

Dent has put out flyers and is offering a reward. She said Valdez needs Hill's Prescription Diet Urinary Care CD because of his kidney problem.

Dent is asking anyone with information about Valdez to contact her at 863-632-0904 or by email at [email protected] or through Facebook at https://www.facebook.com/sandrasandydent