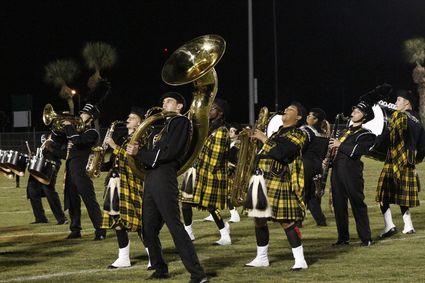 Highlander Band performed at football halftime shows in fall of 2019

Stephen Cornelius had big plans to grow the Lake Wales High School Highlander Band, and then the COVID-19 pandemic hit.

Now starting his second year as director, Cornelius is trying to remain optimistic about the band's future. Cornelius had to cancel marching band camp this summer, but he said marching is still part of the curriculum.

Cornelius will be teaching only at Lake Wales High and Janie Howard Wilson Elementary this year, as his recent intern from Warner University, Meagan Delacerda, will be taking on his duties at Bok academies North and South.

"We're headed in the right direction," Cornelius said "If I can get there (LWHS) full time it's going to be a big asset."

Despite small numbers last school year, about 25 in concert band and 15 in the marching band, Cornelius said "we are growing," and the music students excelled. They earned the school's highest marching music performance assessment scores in seven years, the best concert music performance assessment scores in 15 years and many favorable comments from the judges.

Cornelius said he needs about 60 students to be able to concentrate his efforts at the high school.

"We had a few leave and a few of them come back. They saw the growth. And the kids decided it wasn't lame," Cornelius said.

By focusing on the 144 fifth graders who signed up for band in January and February Lake Wales can then grow its middle school music program, which ultimately will feed into high school band, Cornelius said, noting he hopes at some point every school can have its own music teacher.

In addition to concert and marching, Cornelius plans guitar, drum and Scottish unit classes. He said the drumline grew to 10, the guard to 15 and he now has 30 students playing wind instruments.

Cornelius isn't sure yet what his student numbers will be for fall, which is opening with some students on-site and others choosing online learning.

This spring's virtual classes were challenging, Cornelius admits. Assuming school would return to normal by fall, students in the spring went to a special website to get their assignments for the rest of the year.

"They can videotape or record themselves on their phones or computer and just send them in. Most kids have a phone," Cornelius said. "We do a lot of just play what you want. It offered them the opportunity to play and be creative and still learn."

Cornelius said students also could do written reports, but most liked the option to record themselves: "Then I can listen to students play. That's how they do assessments."

Offering drum, guitar and Scottish classes may not attract enough students, Cornelius said, so he is open to considering other offerings: "In other words, we may be on the wrong track and have to look at other performance classes that reflect the diversity within the school. Maybe music production, or a mariachi band class."

In addition to the music performance scores, Cornelius cited the following accomplishments during the 2019-20 year:

• Participation in 2 Pre-MPA concerts with high praises from the judges commenting on the improvements.

• Elementary "tour" where we teamed up with Bok Academy students and recruited 144 fifth graders to join band.

• New Identity - "Honor the Past, Build a Future"

• I had a student teacher who did wonderful and will be taking the Bok Academy schools. 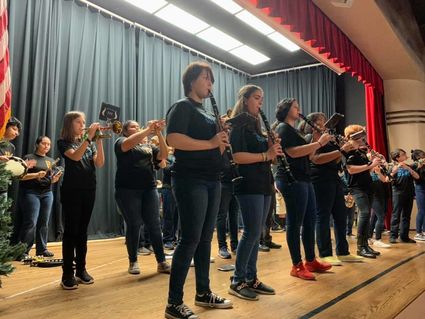 Band students performed at elementary schools prior to pandemic shut-down.

• Support from the Lake Wales Arts Center. They paid for and participated in guest clinicians, rehearsals, marching season and more. They are the biggest help outside of the administration.

"I know the community is concerned but we're in a really good spot right now," Cornelius said.

Goals Cornelius is still working on include:

• Performing more for the community

• All music faculty being full time at the high school to have a quality, functioning, and appropriate high school music program.

• Still have only part time status, and I will be teaching at Janie Howard Elementary.