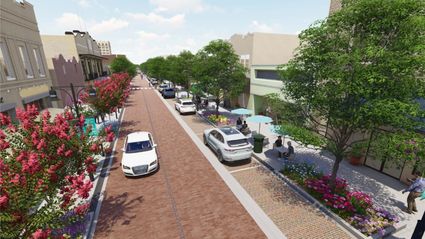 A vision of restored brick streets and sidewalk cafes under the shade of umbrellas and spreading Live Oaks changed many viewers' ideas of the future of downtown Lake Wales Thursday evening.

Those images were among many shared during a 90-minute presentation by consultants and engineers hired by the Lake Wales Community Redevelopment Agency (CRA) to create the "Lake Wales Connected" plan. The plan is designed to attract crowds, and thus business investment, to the neighborhood of historic commercial buildings, and revitalize the city's urban heart.

Led by visionary urban planner Victor Dover of Dover Kohl, the Zoom presentation shared surprising history. The virtual show will be followed up by an in-person public meeting at Exquisite Design, 220 East Park Avenue from 9 a.m. to 2 p.m. and a second virtual meeting on Zoom at 11:30 a.m., both on Friday, July 31. Both will feature the conceptual drawings of the reimagined spaces.

Dover was joined by landscape architect Jay Hood of S & ME, who explained how street trees are planted and spaced to prevent damage to streets and sidewalks as they grow. The oaks would line the sunny, northern side of the street, while smaller flowering trees would provide accents on the southern side.

Among the surprising history Dover turned up was evidence of the original brick streets of downtown. The proposed design would return that feature, while creating broad pedestrian spaces and curb-less streets that would be easily converted to event spaces.

Park Avenue will form the heart of the first phase of the construction, with major changes slated for its intersections with Scenic Highway and First Street. The avenue will be reconstructed from Scenic to Wetmore Street, and will carry two-way traffic after the changes. Hood said design documents will be ready by March, with construction to begin shortly after bids are obtained in April.

Dover called upon CRA Chairman and Deputy Mayor Robin Gibson to answer a posted question about funding for the project. Gibson cited the $2 million on hand and million-dollar annual CRA tax receipts before adding that he supports obtaining bank financing to build the plan, using the cash flow to retire that debt. Increased private investment and higher values will increase the CRA revenue for the project.

Similar projects have transformed other Florida cities, and Dover showed images of the once-stagnant downtown of Winter Garden, now a bustling hub of activity. In response to other questions about the vacant Walesbilt Hotel, Dover cited the once "underutilized" hotel in Winter Garden that is now a high-demand destination.

"We have to create a space where people want to be," Dover said, in order to create the environment that will make restoration of the hotel possible. The plan includes new streetscapes on the north and east sides of the vacant hotel. 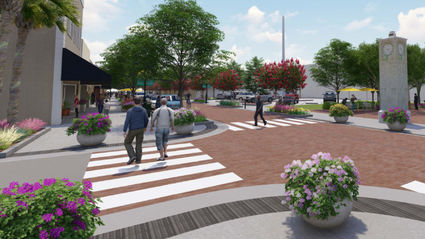 The presentation by Hood and Dover also built upon the history of the city's original landscaping, designed by the legendary Frederick Law Olmsted Jr. Olmsted also designed Bok Tower Gardens and Mountain Lake. In response to a question, Dover called upon Lake Wales Heritage to help educate the public as to the unique significance of the Olmsted plan.

Lake Wales Heritage is a non-profit that is moving to replant Olmsted's trees along the city's residential streets. "I'm excited about the design," said Heritage President Tammy James, "and I think we can collaborate very closely in educating our citizens as we restore the original plantings."