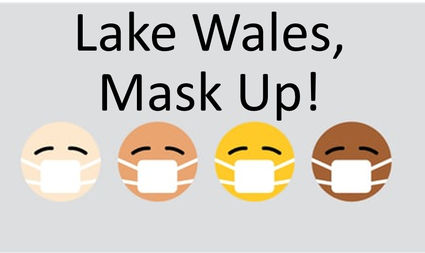 People on both sides of the face mask debate voiced strong opinions to the Lake Wales City Commission Aug. 18, and in the end commissioners in a 3-2 vote imposed a citywide mask mandate.

With some exceptions, people in Lake Wales will be expected to wear masks anytime they venture out of their homes unless they can maintain the recommended six-foot social distance. The ordinance applies only to indoor locations. Police will be empowered to give warnings on first offense and then citations with fines of $50 for a second offense and $100 for a third offense.

Erika Runkle made an impassioned plea to Lake Wales City commissioners that a mask mandate would further hurt her downtown spa business, which has already been struggling due to the pandemic. She said her spa was closed for five weeks, leaving her nine employees with no income.

"I know very few people who have been affected by this health wise but I know a bunch of people that have been devastated by this financially," said Runkle, who has owned The Oasis Spa on Park Avenue downtown for 13 years. "There's a whole financial side to this that people are not realizing. Your friends and family and your community are being hit hard with everything that's going on. Passing an ordinance like this is probably going to further hurt the retail and personal services industry like mine."

Runkle said she expects 70 to 80 percent of her customers might quit coming if masks are required: "I feel like in general it's going to cause people to stay home and not come out and shop and it's going to impact people like me dramatically."

Financial planner Jimmy Nelson, who owns a business and condo downtown, strongly opposed a mask mandate, suggesting the city's July resolution encouraging voluntary compliance was working. Nelson said as a city commissioner 20 years ago he fought for less government and he understood "the emotional aspect of this, the political aspect of this, the difficulty you have in dealing with it."

"It was suggested we need to protect people from sickness and death due to COVID. It was a very heartfelt suggestion, a very sincere suggestion," Nelson said. "I suggest you have already provided a very ample solution without requiring a mandate. What we don't need is more government regulation on top of what is already in place, along with what is already being done by our citizens. That is what is working."

Nelson said his family's funeral home in Lake Wales had only handled six COVID-19 deaths. He pointed out that the city's emergency management official, Fire Chief Joe Jenkins, in his report that evening said virus cases in Lake Wales had been declining for nearly a month and the city should "Keep doing what we're doing. It's working."

Occupational therapist David Jones and others insisted commissioners had a responsibility to protect the public health, offering statistics to show that mandatory mask wearing would be effective in slowing the spread of the COVID-19 virus.

"I like that we are still trying to protect our citizens. This is one thing we are supposed to do," said Commissioner Terrye Howell, who admits she seldom leaves home due to her own health issues and the vulnerability of her 94-year-old mother. Howell said not having a mandate encourages people from other cities with mandates to come to Lake Wales, possibly spreading the virus.

Approving the mandate were Howell, Mayor Eugene Fultz and Deputy Mayor Robin Gibson, who offered a compromise amendment that would relieve businesses of the burden to enforce the mandate.

Commissioners Al Goldstein and Curtis Gibson continued their opposition, saying they support voluntary mask wearing and believe their July resolution is working. Goldstein noted Winter Haven has five times more COVID-19 cases and Lakeland has more than eight times more cases than Lake Wales, and both have mask mandates. He said he doesn't like putting police officers in a bad position having to enforce the mandate, which he believes is bad for business.

"We have enough trouble bringing new business into the city. We don't have to show them that we are not business friendly," Goldstein said. "It's working against everybody's civil rights. What's next? This isn't 1984."

The new ordinance, which the city attorney said could be rescinded within two weeks once commissioners believe it is no longer needed, requires businesses to post signs informing people about the mask mandate. The sign will be available to download from the city website.

Exemptions to the mandate include:

- Persons under the age of eight years

- Persons for whom a face covering would cause impairment due to an existing health condition; businesses are not permitted to ask a person to identify a specific health condition or provide documentation

- Public safety, fire and other life safety and health care personnel, as their personal protective equipment requirements will be governed by their respective agencies

The full ordinance can be found at https://www.lakewalesfl.gov/DocumentCenter/View/4258/Ordinance-2020-15-Face-Mask