Next Meeting Set for Sept. 10 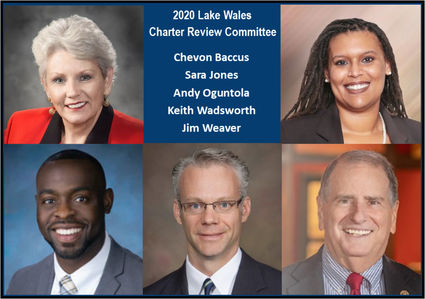 The Lake Wales Charter Review Committee is ahead of schedule and looking for public input on changes that can make city government operate better.

The next Committee meeting will be at 6 p.m. Thursday, Sept. 10 at the city administration building, 201 W. Central Ave.

People can attend in person or join online by registering at https://www.lakewalesfl.gov/Register

The current Charter, which was last reviewed in 2010, can be found online at http://lakewales.elaws.us/code/charter

Interested persons may offer opinions or ask questions about any section of the Charter while the topic is being discussed or during the communications and petitions portion of the meeting. Input or questions also can be emailed to [email protected]

The mayor and commissioners each appointed one member to the Committee. Members, who have been meeting every two weeks since July 16, include: attorneys Sara Jones, Keith Wadsworth and Jim Weaver, and college administrator Andy Oguntola. The Committee chairperson is news publisher and consultant Chevon Baccus, who served on the 2010 Charter Review Committee.

The Committee will present its findings and recommendations to the City Commission, which will have the final say on which items will go for voter approval on the April 2021 ballot. So far, potential Charter changes the Committee may recommend include:

CANDIDATE RESIDENCY: Candidates for mayor or city commission currently must live within the city limits for one year before qualifying to run. The Committee is recommending a three-year residency requirement so potential commissioners have a better understanding of the community before seeking to govern.

DUTIES OF COMMISSIONERS: The current Charter details the duties of the mayor, but doesn't specify duties of commissioners. Since these duties are not spelled out in the charter or ordinances, the Committee agreed it would be prudent to include them in the Charter. The proposed list of duties is still being fine-tuned by the Committee. (SEE sidebar story to the right, which includes updates from Aug. 27 meeting.)

The Charter Committee is still working on duties of city commissioners to recommend for inclusion in the Charter. Here is the working draft, updated after the Aug. 27 meeting, but additional input is welcome and encouraged:

Individual commissioners have no express power, but members acting together as a city commission are responsible for:

- Adopting vision, goals, and policies for the city

- Representing the best interests of the city and its citizens

- Employing, supervising, and evaluating a city manager, who is responsible for the city's day-to-day operations

- Setting rates for any special fees or assessments

- Adopting a long-range comprehensive plan for land use, planning, and zoning

- Promoting active citizen engagement in the affairs of the city